Syria’s Permanent Representative to the UN in Geneva has lashed out at Israel's treatment of Syrians living in the Golan Heights reports The Syria Times. 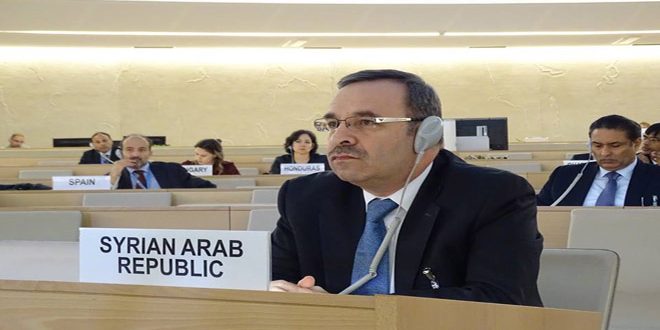 Syria’s Permanent Representative to the UN in Geneva, Hussam Eddin Ala affirmed that the Israeli attacks on scientific and civilian facilities in Syria indicate that the Israeli entity has moved into a new phase of state terrorism, after years of supporting terrorist organizations and supplying them with logistical support, direct military support and preventing their defeat.

In a statement delivered before the 39th Session of the Human Rights Council, dedicated to discussing the Human Rights situation in the occupied Syrian Golan Heights. Ala said that there is no doubt that Israel would not have continued its aggressive behavior without the cover and protection from accountability provided by the US and its allies at international forums. This includes the Human Rights Council, where US pressure to cancel item 7 continues as the British resort to voting down all resolutions condemning the Israeli practices.

“Some countries in this Council defend the Israeli occupation and its extreme racist practices and violations of the obligations imposed on it under international humanitarian law, and its daily violations of the rights of the Palestinians and the Syrians in the occupied Syrian Golan, which makes those countries partners in these violations,” Ala said.

Ala pointed out that the occupation army continued its practice of indiscriminate killing, in addition to its attempt to forcibly deport the residents of al-Khan al-Ahmar village east of occupied al-Quds (Jerusalem), while keeping in place the suffocating siege and collective punishment of about two million people in the Gaza Strip and adopting legislation that codifies the apartheid. All of these examples shows the disregard the occupation has for all international laws.

Ala noted that “the Israeli occupation in the Syrian Golan continues to impose arbitrary measures to punish the people of the Golan, in addition to imposing an arbitrary siege on them by preventing them from using the Quneitra crossing to continue their studies in Syrian universities, visiting their families and selling their agricultural products in Syrian markets, in the context of a systematic policy aimed at severing the bonds with their homeland.

“The Israeli authorities continue their attempts to perpetuate the occupation of the Syrian Golan by continuing to build and expand settlements and plans to increase the number of settlers to 100,000 over the coming ten years, Ala said.