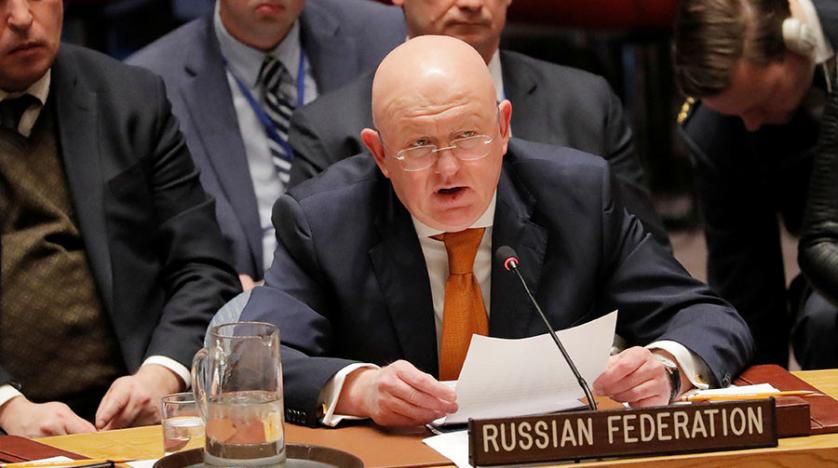 Russia has stepped up its rhetoric against regional and international parties that are demanding a comprehensive political settlement before they participate in economic aid and the reconstruction of Syria.

In an interview with Tass, ahead of a high-level week of the 73rd UN General Assembly, Russia’s Permanent Representative to the UN, Vasily Nebenzya, declared his country's rejection of what he described as "attempts to politicize" the files of the humanitarian and economic aid to Syria and the return of displaced Syrians to their homeland.

Hinting at the United States and European countries, which have refused to contribute to economic aid before a political settlement is reached, Nebenzya said that the three guarantor states of the Astana process are exerting great efforts to move forward with the political process.

Nebenzya went on to say that the "latest summit between Russia, Iran and Turkey in Tehran and the Russian-Turkish agreement on Idleb, reached in Sochi, were positively received by the international community."

Russia’s ambassador pointed out that Moscow may take part in the EU meeting on Syria to convince Western partners to stop their evil practices against Damascus.

"As for the EU event, as far as we know, it will be a follow-up to the Brussels conferences on Syria, and their key message was the reluctance to provide assistance to reconstruct Syria until political reforms are carried out there," Nebenzya said.

Nebenzya stressed that the directive, drafted by a branch of the UN Secretariat late last year, "is absolutely illegitimate, it has not been agreed by the member-states and runs counter to the neutral spirit of the organization."

“This document is just one of a few attempts by certain member-states to manipulate the secretariats of international organizations to achieve their geopolitical interests,” he said.

"We hope that the necessary steps have been made," Nebenzya said.

In other news, Russian Presidential Spokesman Dmitry Peskov dismissed rumors in Israeli media that President Vladimir Putin was angry with Syrian President Bashar Assad over the IL-20 incident and refused to answer his phone calls.

"This has nothing to do with reality. Do not believe these speculations by Israeli mass media," Peskov said.

The spokesman recalled that Putin had already made a comment on the incident, which required "no extra explanations.”