The President of Abkhazia has been on a four day trip to Syria to discuss trade and economic cooperation writes SANA. 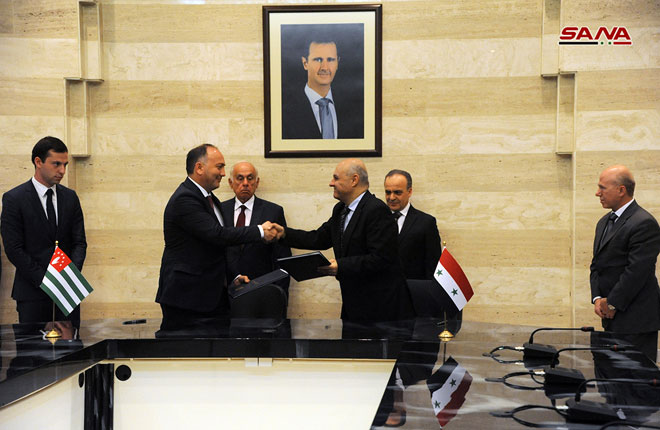 The first agreement stipulates the establishment a joint committee for economic, commercial, scientific, technical and cultural cooperation, while the second one provides mechanisms for trade and economic cooperation between the two friendly countries.

The Minister of Economy and Foreign Trade Mohammad, Samer al-Khalil and the Chairman of Planning and International Cooperation Authority, Imad Sabouni signed the agreements on behalf of the

Syrian side while Foreign Minister Daur Kove and Economy Minister Adgur Ardzinba signed for the Abkhazian side.

The signing of the agreements came after talks held between Prime Minister Imad Khamis and President of Abkhazia Raul Khajimba and the accompanying delegation.

For future cooperation, Khamis affirmed the need to work with clear bases in a way that achieves mutual interest for the two friendly people.

For his part, President Khajimba affirmed the importance of activating economic and tourism relations between the two countries.