As well as holding meetings with the President, Zarif also meet with the Prime Minister and Foreign and Expatriate Minister Walid al-Muallem writes SANA. 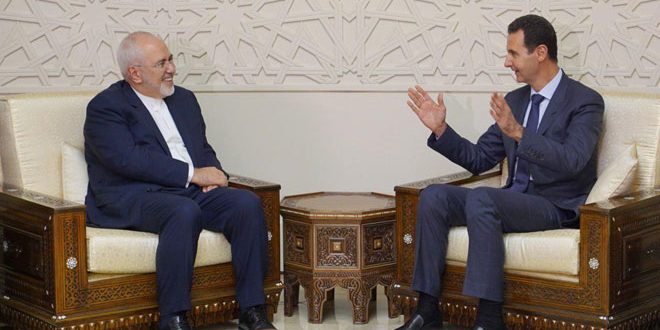 Talks during the meeting tackled developments in Syria and the region, as well as issues that will be discussed at the Russian-Iranian-Turkish summit due to be held in Iran within a few days, with the two sides expressing matching viewpoints regarding various issues.

President Assad and Zarif asserted that the pressure exerted by some Western states on Syria and Iran will not dissuade them from defending their principles, their people’s interests, and the security and stability of the entire region.

The two sides said that the policies of threats and pressure against Syria and Iran, by these Western states, show their failure in achieving the plots they had devised for the region after Syria and Iran opposed them.

President Assad and Zarif voiced their satisfaction of the relationship between the two countries in various fields, and agreed to continue consultations and coordination on all levels, particularly in light of the rapidly-shifting regional and international variables.

In the same context, Prime Minister Imad Khamis met Zarif and discussed the importance of enhancing bilateral relations and cooperation in all fields, particularly economic fields.

Discussions touched on the need to involve the public and private sectors from both countries in developing their economies and establishing joint project that realize the interests of both sides.

Foreign and Expatriate Minister Walid al-Muallem also met Zarif and the accompanying delegation, discussing with them the latest developments in politics and on the ground, in light of the victories against terrorism achieved by the Syrian Arab Army and its allies, and in light of the ongoing political activity to prepare for the tripartite summit for the guarantors of the Astana process.