Member of the Asayish militia stormed schools and tried to impose a new curriculum reports SANA. 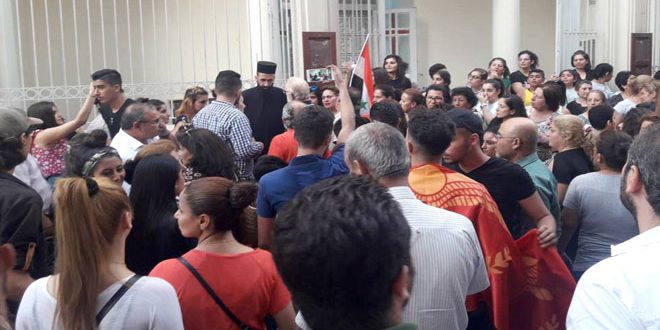 Hundreds of locals from Qamishli city protested against members of the Asayish militia who stormed a number of schools and imposed a curriculum that differs from the official curriculum of the Ministry of Education.

The protestors affirmed their rejection of the curriculum which the Asayish wants to forcibly impose upon the city’s schools. They stressed the need for putting an end to these practices which affects the educational process and threatens the future of upcoming generations.

SANA’s reporter said that hundreds of locals from Qamishli city along with a number of the Christian clergymen and dignitaries from the tribes participated in the protest, condemning the Asayish’s practices and reiterating that education must be in accordance with the curriculum adopted by the Syrian Ministry of Education.

In turn, Head of Hassakeh Education Directorate EIham Sarokhan said that the imposing of a curriculum by force is totally rejected and that only the official Syrian curriculum will be implemented in schools.

She pointed out that the curriculum which the Asayish members are trying to impose is not related to Syrian civilization and history.

Members of Asayish broke into a number of schools in Qamishli city and expelled the administrative staff, which aroused the anger of the citizens of Qamishli who protested against these practices and managed to restore the schools as they hoisted the national flag over them.