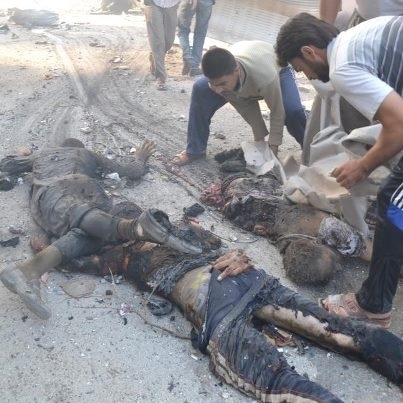 The FSA had clashes with regime forces in 66 points, most of them were reported in Damascus and its Suburbs. The FSA was able to liberate many checkpoints in the Southern Neighborhoods of Damascus and the Suburbs.

Damascus Suburbs: Sayeda Zainab: Many wounded have fallen due to fierce artillery shelling of the city

Damascus: Fierce clashes are reported in most of the capital’s neighborhoods coinciding with shelling at the areas of Eastern Ghota, Mokhayyam areas, Tadhamon and Hajar Aswad

Daraa: Nawa: Regime forces raided the city with 10 tanks amid fierce shooting and bombardment at the houses. Clashes between FSA and regime forces are also reported and FSA ruined two tanks and captured some soldiers and officers

Damascus suburbs: Bait Sahem: Some injured by a new fierce artillery shelling at the town and two bombs fell near the municipality and around Aljamal square

Damasucs: Baghdad street: Sounds of intensive shooting were heard in the area

Qunaitra: Jaba: Fierce clashes were reported between regime forces barracks in the area and FSA from the direction of Tal Alsha’ar and near Alsalam highway

Damascus suburbs: Sbaina: A fire in Jisr neighborhood is reported as a result of fierce shelling at the area

Homs: Houla: Fierce shelling from Qurmos checkpoint towards the city

Damascus: Huge explosions shake all the neighborhoods in the city as a result of shelling the Eastern Ghouta and the Southern neighborhoods of the Capital

Daraa: Khirbet Ghazaleh: Heavy artillery shelling is reported from the barracks east of the town

Daraa: Nawa: 15 shells fell on the Eastern and Southern neighborhoods along with fierce clashes between the FSA and regime forces, many buildings were burned as a result of the shelling

Damascus Suburbs: Saqba: Wounded due to fierce mortar and missiles shelling of the town by the regime forces

Idlib: Sarmeen: Heavy shelling by artillery and rockets is reported in the city

Daraa: Nawa: Heavy clashes are reported between the Free Syrian Army and the regime’s army in the town

Daraa: Sheick Miskin: Artillery and rocket shelling of the city by regime forces stationed in Brigade 82 east of the city is reported

Daraa: Daeel: Fierce rocket shelling is reported in the city

Daraa: Tariq Al-Sad: 23 people were martyred in a new massacre by regime forces in Tariq Al-Sad. The martyrs’ bodies were found in two civilians’ houses which were targeted by two barrel bombs dropped from regime forces’ warplanes

Damascus: Yarmouk Camp: 6 people were martyred today in the camp and they are: Nadir Khalil Joma’a, Khalid Hassen Amayri, Tareq Sharif, Nahed Yunis, and Susan Saleh due to regime forces’ shelling of the camp