Opposition activists, both civilian and paramilitary, adopt noms de guerre, especially when talking over the radio. Government and opposition combatants can hear each other’s radio traffic, and often spend their evenings trading accusations, insults, even jokes and political songs with the other side. 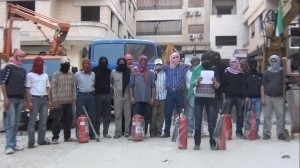 “Everybody should have someone like Almani,” said Abu Omar, laughing.

Abu Omar, a battalion commander in the Free Syrian Army, FSA, in Eastern Ghouta outside Damascus, was talking about the head of a new police force set up after rebels took control of the area in November.

A rescue team in the Eastern Ghouta area outside Damascus, which is under the control of the FSA

Almani is a pseudonym which means “German”. Opposition activists, both civilian and paramilitary, adopt noms de guerre, especially when talking over the radio. Government and opposition combatants can hear each other’s radio traffic, and often spend their evenings trading accusations, insults, even jokes and political songs with the other side.

Before the revolution that began nearly two years ago, Almani was a civil servant leading a mundane life. Now he is in charge of a police force and also a rescue team, both of which are made up of volunteers and operate in a war zone with neither fixed headquarters nor uniforms.

“We have brought in cisterns so we can put out fires and supply people with water,” Almani said. “We’ve also brought [bulldozers] to clear rubble and rescue people after airstrikes, and cranes to fix electricity lines with.”

In addition, he said, his rescue team transported the wounded to field hospitals and moved civilians to safer areas during air strikes.

Since the FSA appeared in the area, residents have complained about the conduct of some of its members, posting messages on Facebook or holding up placard at demonstrations. They allege that FSA members arrest suspected regime collaborators indiscriminately, taking them away in the trunks of cars. FSA soldiers are also accused of delaying people at checkpoints, driving recklessly, and favouring their own relatives when food supplies are distributed.

“We suffered a lot at the beginning,” local resident Um Ahmad said. “Most of the rebels treated people badly, but the decent ones among them were able to make a difference. I’ve always complained, and urged my neighbours not to give up on their rights. We didn’t reject the regime in order to suffer repression at the hands of the armed [FSA] men we supported.”

Such complaints led to the formation of a Military Council to supervise the FSA. Most of the rebel battalions in the area have joined it, according to council members. The council runs a prison under the supervision of judges and prosecutors who have defected.

The first case the council had to investigate was that of the Abu Salmo battalion. It forcibly disarmed and arrested battalion members, who are among the fiercest opposition fighters but were accused of robbery and assault. The Military Council is now examining their cases.

Other complaints which it is investigating involve houses seized by the FSA when their owners abandon them. These houses are usually handed back if the owners return, except for those belonging to officers in the security forces or regime collaborators. Their homes and possessions are regarded as legitimate booty of war.

Another administrative body called the Civic Council has also been set up. Its tasks involve supervising the police and the rescue team.

“Some of those bearing arms believed they were now the state, and that they could loot whatever they wanted,” Abu Jihad, one of the Civic Council’s founders, said. “They are not members of the FSA, and they don’t represent the majority. These are groups that wanted to derail the revolution.”

Abu Jihad believes things have improved a lot since the two councils were put in place, especially after local dignitaries were assigned roles that the FSA could not perform.

Hossam, an opposition media activist, agrees that the FSA’s conduct has improved.

“Many people see the FSA’s presence in residential areas as wrong, and believe it prompts air strikes,” he said. “But they are our own people, and they have neither tanks nor aircraft with which to defend themselves.”

By contrast, Nur, a young man who was arrested by the FSA at one point, sees no benefit from its deployment in the area.

“The security forces arrest us and beat us up, then the Free Syrian Army comes and interrogates us, and after that the regime bombards the area,” he said. “It’s all because of the FSA.”

Asked about complaints of this kind, Almani let out a sigh and said, “The police’s job is to serve the people. Anyone who’s in charge will get the most blame. We just have to get used to that.”

After our conversation ended, Almani headed off to restore electricity for one of the neighbourhoods.

Whenever the power is cut, his rescue team extends cables from areas that have electricity to those that do not – exposing themselves to the risk of being shot by regime snipers. As he walks, Almani blows his whistle, letting people know that they will soon have their electricity back on.