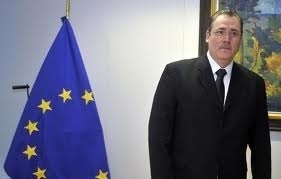 With political negotiations going nowhere and no warring parties showing any willingness to cease the violence in Syria, new figures released Thursday highlight the cost and scale of the human tragedy in the country’s escalating civil war.

And as the human, societal and economic costs mount, economists and analysts say politicized donor nations are failing to step up, warning that the Syrians will be left to manage the recovery themselves.

U.N. officials now say some 4 million people are currently trapped inside Syria after fleeing the fighting, a dramatic rise on earlier estimates by the U.N. High Commissioner for Refugees of 2.5 million displaced living in precarious conditions in the country.

Another 1.2 million refugees have streamed across borders into neighboring countries, placing a huge strain on governments in Jordan, Turkey and Lebanon that have kept their frontiers open.

The U.N. estimate is due to be officially released in the coming days. It adds urgency to refugee numbers released as part of the U.N.’s ESCWA report last month, warning that the cost of reconstruction for Syria – even if the violence were to stop today – would stand at some $80 billion.

Commenting on the report, Abdullah Dardari, head of ESCWA’s Economic Development and Globalization Division and former Syrian deputy prime minister for Economic Affairs who is working on a U.N.-backed reconstruction plan for the country, told The Daily Star the figures were “shocking.”

“Preliminary numbers show there are 5 million people now in a state of abject poverty,” Dardari said. Abject poverty is defined as living below the poverty line of $2 a day, estimated to be the amount needed to meet minimum calorie requirements for survival.

Some “2.5 million people are unemployed today compared to less than half a million two years ago,” Dardari added.

He said that “400,000 homes have been fully destroyed, 300,000 have been partially destroyed and 500,000 are without access to basic infrastructure.” But he added that there was some cause for hope in the alarming figures.

“There is a message here, that if the war stopped now, the country has a good chance of recovery in terms of increasing its budget deficit and foreign debt.”

However, with fighting unrelenting for now, attention is shifting to how Syria can cope with the cost of the war, whoever wins militarily.

More perplexing is the question of who will step up, via direct funding, aid or investment, to help that recovery process.

The United States Thursday echoed calls for donors’ help in a burgeoning aid crisis. But that call comes amid growing complaints that the majority of funds pledged have not reached Syria and, more cynically, that geopolitics involved in a regional proxy war are hindering the distribution of funds.

Donors who gathered at a conference in Kuwait in January pledged some $1.5 billion in aid for the Syrian people – of which $520 million was specifically to help people trapped inside the country. But to date only about 30 percent of the funds pledged have actually been received.

The United States has so far provided some $385 million for humanitarian aid, of which nearly $216 million has been spent on needs inside Syria, with some 60 percent going to opposition-held areas.

Citing other examples, an informed Syrian source privy to the discussions said the political divisions over the Syrian crisis were hindering the distribution.

“There is simply no appetite to finance huge reconstruction programs. Europe is in no position to help. And the experience with the Gulf countries in the cases of Egypt, Jordan and Yemen show funds have not been forthcoming,” the source said. “The Syrian humanitarian crisis is being used as a political instrument.”

“Syrians will find they have to fund this reconstruction themselves, managing whatever resources they can muster and using their own networks.

Yet with no end in sight, for those inside the country conditions continue to deteriorate. “What we’re seeing … is that now it is not just violence that is driving flight,” U.S. Deputy Assistant Secretary for Population, Refugees and Migration Kelly Clements told AFP.

“It is also just a decline in livelihoods, a decline in the economic means for families to be able to support themselves. It’s disruption to services, it’s kids not being able to go to school, it’s water systems that have been either cut off or somehow affected.”

Health services, bakeries, schools – vital components of normal life – are teetering or have shut down, leaving a population in distress.

Those who could flee have already gone, leaving the most vulnerable to fend for themselves. Aid agencies themselves have lost team members killed in the fighting, while U.N.-led operations to get assistance across battle lines have proved dangerous and complex involving delicate negotiations.

“Really the most pressing challenge for all of us is just how dangerous and unpredictable the security environment is and the need for greater access,” said Nancy Lindborg, assistant administrator for the U.S. Agency for International Development. – with AFP