Activists said security forces arrested the prominent Syrian actress and outspoken activist against the regime on Thursday and released her in several hours later, she was released. 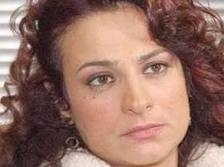 Activists said security forces arrested the prominent Syrian actress and outspoken activist against the regime of President Bashar Assad May Skaf earlier Thursday while she was travelling from her home in Dummar, Damascus. Several hours later, she was released.

The activists said Skaf called her son, telling him that members of security forces had taken her ID and that she was waiting for them to give it back to her. After that, her mobile phone was switched off, they said.

But her friends reported later that she was released.

Activists said that by arresting Skaf, the regime is attempting to strangle all political and cultural voices in an attempt to prove its narrative that it is fighting terrorism.

Comments by activists on social networking platforms said Thursday: “The terrorism of May Skaf frees us."

Skaf is known for her support of Syrian revolution since its early day. She was one of the first cultural figures to announce her position against the regime and has been arrested multiple times. One one occasion, Skaf was arrested after participating in a demonstration in Damascus of intellectuals protesting against the security forces actions against peaceful demonstrators then.