The Syrian ambassador to Jordan, who a cousin of Assad, the father, warns of a "third World War", and lashes on turkey and the Gulf states, describing them as "Sheikhdoms of gas and oil 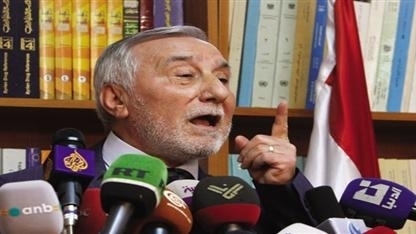 The Syrian ambassador to Jordan, Bahjat Suleiman warned a "third World War" was on the horizon, on the back of an "aggressive, global war on Syria," in comments in Amman ahead of the Friends of Syria Foreign Ministers meeting Wednesday.

Suleiman said he was certain Syrian President Bashar Assad was run for presidential elections next year, also condemning the 'Friends' meeting, which he said was more like a meeting of "the enemies of Syria."

Speaking at a press conference at the Syrian embassy in Amman, Suleiman said "an aggressive, global terrorist war, led by those who called themselves the friends of Syria is being waged against the State, the Syrian people, the political leadership and the army" which has forced Syria into a "holy defensive war against an oppressive media campaign unlike any other in history."

Addressing the participants in the conference, he said: "Those who want to end the tragedy in Syria need to first stop arming and training terrorist groups, to cooperate with the legitimate national state — like Syria's true friends have — and stop accusing what they call the regime of destroying the country and slaying its people."

He also attacked Gulf Arab states which he said were "Sheikhdoms of gas and oil, which are destroying Syrian people."

Suleiman criticized the United States which he said has "never been a friend of the Arabs and is in fact their first enemy." He said the U.S. had started tens of wars against third world nations "to dominate them and guarantee their loyalty to American political and economic policy."

"It embraced a cancerous cell in the Holiest land of the Arab world: Palestine…which they transformed into Israel," he said.

Suleiman warned Jordan against involvement in the Syrian crisis, due to its own economic problems.

"Syria fights the hands of Israel in the region," he continued, describing the Syrian crisis as "a war without historical equivalent" in which a media campaign has been launched to "subvert reality, show armed gangs as revolutionaries and the Syrian army as murderers."

Suleiman said he sought to clarify the perception of refugees coming into Jordan due to humanitarian reasons, saying they were in fact "following material temptations, or are terrorists, or are relations of terrorists."

He said Jordanian authorities have not allowed the Syrian embassy in Jordan to communicate with Syrian refugees, despite tens of official letters addressed to the Jordanian foreign ministry to address this."