Sheikh Moaz al-Khatib releases a new initiative to end the crisis in Syria to "prevent the decay of the Syrian people," 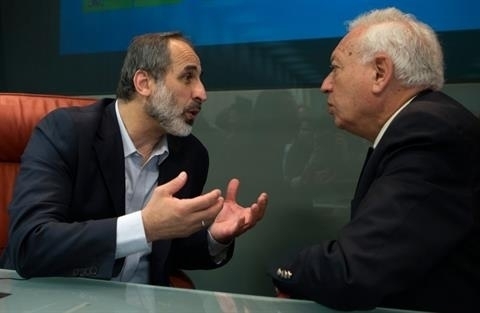 Khatib said the initiative was designed to "prevent the decay of the Syrian people, its territory, infrastructure, and economy, and the destruction of its social structure and values," adding that this was "a right for our country and our people."

Khatib said the initiative is "a product of Syria, and its goal is Syria. It should be taken as a full package and is set by a clear timetable."

He asked the Syrian regime, along with all the opposition and revolutionary forces to adopt it as an "exit from the national disaster affecting our country," also asking the international community to sponsor the initiative and guarantee its execution as follows:

1.      The president should announce his acceptance of the initiative and a peaceful transition of power within 20 days, handing over full authority to his deputy Farouk al-Sharaa, or the Prime Minister Wael al-Halqi.

2.      The current president should dissolve the current parliament and his legislative powers are handed over to the person chosen to take an interim role as president.

3.      After accepting a peaceful transition, the current president will be given a time period of one month to completely hand over authority.

4.      The current government will continue its work on a temporary basis of 100 days beginning from when the interim president is assigned.

5.      The assigned president will be given full executive powers to administer Syria, excluding any authority to include any member blacklisted by the international community.

6.      The interim government will be given authority to restructure the security and military forces during a period of 100 days.

7.      Once the initiative is accepted, all political prisoners and detainees must be released. This should be done under international surveillance and all efforts should be made for the rehabilitation of displaced persons to return to their homes.

8.      All the Syrian territories will be opened to all types of local and international humanitarian relief.

9.      The current president will leave the country, along with 500 people, whom he will select, along with their families and children, to any other country that may choose to host him.

10.  No legal immunity will be offered to the current president or any of those five hundred departing. This matter will be referred to a legal council agreed upon by the Syrian people.

11.  The General Secretary of the United Nations is to delegate an international mediator with the responsibility of overseeing the interim phase in Syria, ensuring commitment to it and supervising the transition.

12.  All parties involved in the fighting are to halt the use of heavy weapons under international monitoring.

13.  All those partaking in what is considered “legal military action” as defined by international law during the war, will be issued a general pardon. However, all those commands that took part in the killing and targeting of civilians, torture, rape, and kidnapping will be considered as having taken part in criminal offences. The perpetrators must be put to trial under criminal law, both nationally and internationally.

14.  In each governorate a committee will be established consisting of five people who will be selected by the representatives of respective governorates, responsible for its administration while under international supervision. This committee will be given full authority for the management of local affairs, including the administrative, economic, security and military matters, and will be directly affiliated to the person who is assigned as temporary president, or someone else whom he delegates.

15.  Following the first 100 days, after implementing the articles of the initiative, all authority will be transferred to a transitional government which should be agreed upon and negotiated within the framework of international resolutions.

16.  The subsequent transitional government will be responsible for the preparation and reconstruction of the new Syria.

Khatib, who had participated in a consolidation meeting by the opposition in Madrid, also complained on Wednesday that he wasn’t invited to attend the "Friends of Syria" meeting in Amman this week.