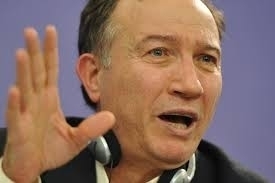 France-based Chairman of the National Coordination of Democratic Change (NCC) Haitham Manna has invited opposition forces to an urgent meeting to unify their position on the proposed Geneva 2 conference.

Speaking to Zaman al-Wasl, Manna said the meeting should settle on one consensual leader for all opposition forces to present a complete political vision expressing the Syrian revolution.

"The time has come for opposition forces to start over," Manna said.

"Far from selfishness, narrow prejudices and external orders, [we need] to agree on a united program to save Syria from what is happening now," he said.

"We can get rid of the regime of Bashar Assad", Manna continued, adding that the presence of a united opposition with the people's legitimacy is the first step to erode the regime.

Manna suggested Cairo should host the opposition meeting as the most neutral country on Syrian crisis that has always kept an equal distance from all opposition forces.

Regarding the election of a consensus figure to represent Syrian opposition at Geneva 2, Manna said while there are many nominees, Riyadh Saif is one who enjoys support by all, including the Syrian National Coalition, the NCC, the Democratic Platform and the Kurdish parties.