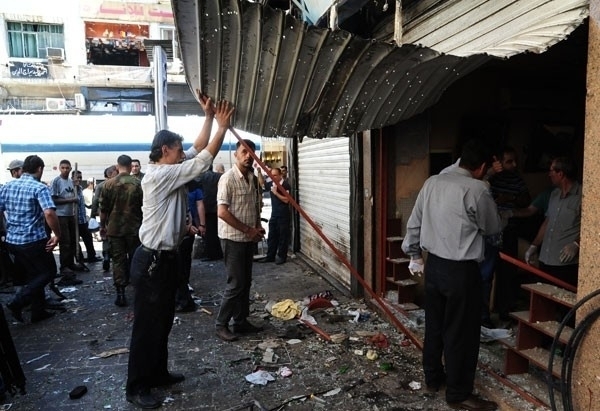 The Syrian capital of Damascus was rocked by two bombs on Tuesday, amid reports that government forces are preparing an offensive against the northern city of Aleppo.

The Syrian official news agency SANA reported that two suicide bombers blew themselves up near the Police Department in Damascus, causing the martyrdom of 14 people and wounding 31 others.

The Syrian Observatory for Human Rights (SOHR), an activist group based in London, said that 15 people were killed, and that most of the casualties were police officers at the area’s Al-Indibat police station

The SOHR also reported that one of the explosions was the work of a suicide bomber who detonated his device inside the station.

A previous car bombing in Marjeh Square, where Syria’s Interior Ministry is located, killed five people at the end of April.

The Syrian cabinet condemned the bombing, describing it as a “cowardly act (which) came as a result of the moral bankruptcy of the armed terrorist groups and those who stand behind them after the distinguished victories of the Army all over Syria."

"Behind this crime stand those who try with all means to prevent Syria from shifting into the political settlement track to resolve the crisis, particularly during this decisive stage of preparations for the Geneva international conference," The Russian Foreign Ministry Sergei Lavrov said in a statement.