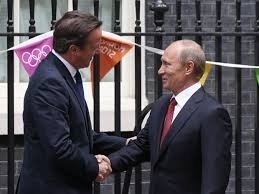 Russian President Vladimir Putin said Monday that Russia is doing its best to prevent the fragmentation of Syria.

Putin was speaking at a joint press conference with British Prime Minister David Cameron ahead of a G8 meeting of world leaders in Ireland Monday.

He acknowledged that Russia's viewpoints regarding Syria differ from Britain's and stressed the need to exert more efforts to deal with the crisis.

"Do you want to support and send weapons to those who eat human organs?," he asked Cameron of western discussions about arming the Syrian rebels.

He pointed out that Russia provides weapons to a legitimate government in Syria without breaching international law, and said diplomacy and politics are still the best methods to resolve the crisis in Syria.