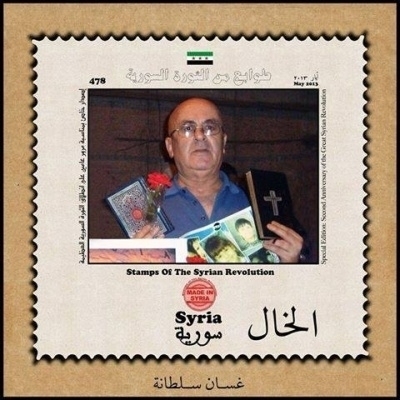 Syrian activist Ghassan Sultan published on his personal Facebook personal page what he called his "last will," asking that his body organs be donated to any Syrian who needs it, except supporters of Bashar Assad.

Well known across social networks with the nickname "al-Khal" (The Uncle), Sultan also asked in his will to have an Islamic burial in a liberated mosque, to be buried in an Islamic cemetery, and to be announced a Muslim after his death.

He asked to be carried into a church in a liberated city so that his relatives and friends could wish him farewell, and to write on his tombstone that "he died because of his heartache for his Syria, he died but he didn’t lose his mind, thus he miraculously escaped with his life."

Sultan was famous for running an office in Damascus for artistic festivals and tourism marketing. He is the Chairman of the Society of Artists' Friends and he organized many festivals, the first of which was the Dice Festival in 1993.