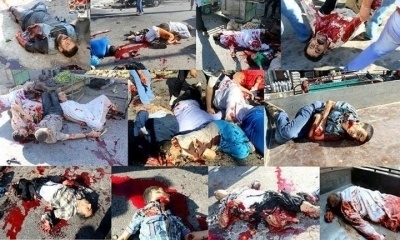 The first massacre occurred in the northwestern province of Idlib, in the town of Ariha on Sunday killing 13 people, a monitoring group said.

"Thirteen people were killed in shelling by regime forces on the centre of  the town of Ariha in Idlib province," the head of the Syrian Observatory for Human Rights, Rami Abdel Rahman, told the AFP news agency.

Dozens were also reported wounded in the shelling, according to the London-based Observatory.

The second massacre took place in the town of Souran, in Hama province, where seven people from the same family were killed.

The third was committed by forces loyal to Bashar Assad, who killed at least 13 members of the same family in the Sunni Muslim village of Bayda, in what activists said was the second massacre there, according to Reuters.

The Observatory said four women and six children were among those killed in the village, which is in a coastal area of Syria's Lattakia province.

"A relative came to look for them today and found the men shot outside. The women and children's bodies were inside a room of the house and residents in the area said some of the bodies were burned," said Rami Abdel Rahman.

In May, pro-Assad militias killed more than 50 residents of Bayda and over 60 residents of the nearby town of Banias. In those killings, some bodies, many of them children, were found burned and mutilated.

Bayda is part of a small pocket of Sunni Muslims in the Mediterranean province of Tartous, a stronghold for Assad's own minority Alawite sect.

Sectarian clashes and alleged massacres have become increasingly common in a conflict that has killed more than 100,000 people.

The killings in Bayda came a day after a rare eruption of clashes was reported in the area between Assad's forces and rebels in the coastal enclave.

The Observatory, which has a network of activists across Syria, said all the victims, had been executed.