Religious authorities are insisting on women veiling in Damascus Countryside 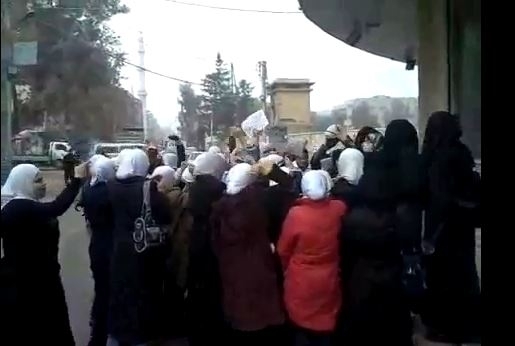 Mai, 28, from Damascus, works as a project management trainer at a pro-opposition cultural organization in Eastern Ghouta.

She does not walk on the street without wearing a scarf on her head and a shirt that goes down to her knees.  She would normally not wear this type of conservative clothing, but began dressing like this after she was threatened on the street in June.

The incident went like this: Two older bearded men on motorcycles had passed by her, and one of them addressed her without looking at her face.

“I don’t want to see you like this again!” he said.

Bewildered, Mai asked the man who he was. He ignored her and repeated what he had said.

“I will stomp [on] you with my feet if I ever see you like this,” he added menacingly. Mai understood that “like this” meant unveiled. She heeded the warning without knowing who the two men were.

This incident is one example of the general atmosphere prevalent in the eastern towns of Ghouta such as Douma, Kfarbatna, Arbeen, Ayn Tirma, Jisreen, Saqba, Hammouriya, and Al-Maleeha since the beginning of this year.

There is no written law imposing the veil, but it is advocated by religious authorities in the towns of Eastern Ghouta, out of “respect for the customs of the area and due to their desire to implement Shariah,” according to a police officer of the religious authority overseeing the towns of Jisreen, Kfarbatna, Saqba, Ayn Tirma, and Hammouriya.

Maher, a fighter with the Free Syrian Army from the village of Abada in Eastern Ghouta, views the veil as a requirement in Islam, and wants it to be enforced.

“We implement the laws of God, and His laws anger no one,” he said. Until now, there have been no known incidents where women were punished for being unveiled.

Mai’s encounter was not the first of its kind for her. The young woman was stopped many times on the streets of her city or in neighboring towns when she was unveiled and when she wore a scarf on her head.  For example, representatives belonging to the Jisreen religious authority asked about her identity, her work, and why she was in the area.

One of the men who stopped Mai is Abu Ali, a member of the religious authority in Jisreen, in the central part of Eastern Ghouta. Abu Ali believes that the absence of the veil is a sign that the woman is an outsider, which led him to ask for her identification.

“Alawite women come to Ghouta and plant electronic chips that guide planes towards their target. The religious authority must therefore be sure of the identity of strangers,” he said.

“We do not have a problem with unveiled activists, but we fear for them from extremist factions so we recommend wearing the veil,” the religious authority policeman added.

Zeina, a young leftist who helps provide humanitarian aid work in the towns of Eastern Ghouta, was also harassed for not wearing the veil. She refuses to wear it despite the constant remarks criticizing her for being too “casual.” Zeina is completely unconvinced by Abu Ali’s justification.

“Those who want to work for the regime in opposition areas are going to try to blend in with the residents, and not the opposite as those who want women to veil argue,” she said.

Zeina believes that those who are trying to force women to wear the veil are misinterpreting Islam and are implementing extremist rules.

“I stand strongly with a woman’s right to choose her own appearance, whether veiled or not, and against any imposition of clothing on anyone,” she said.

Abu Yaseen, a member of a revolutionary collective in the Damascus countryside, partly agrees with Zeina in her reading of this phenomenon that enjoys the support of many residents of Eastern Ghouta. He says that movement of rural residents away from education and towards craftsmanship has led to an intellectual narrowness that is intolerant.

Azza is a freelance journalist who lives in Damascus.  She works for opposition media, and wears the veil every time she visits the countryside. She does not see a problem with it.

“The people in the rural areas of Damascus lack money and are under constant siege by the regime’s army. The pressure on people is enormous, and we should not judge them for a natural reaction to difficult circumstances, but rather try to understand what they are going through,” she said.

At the start of the protest movement against Syrian President Bashar Assad in the towns of the Damascus countryside, unveiled women and girls participated in the demonstrations side by side with women wearing different types of Muslim garb: knee length coats known as “manteaux”, black veils, or loose trousers and colored veils with blouses. Mai, Azza, and Zeina took part in many demonstrations in Saqba, Douma, and Zamlaka without any opposition or harassment. Today, however, they are being asked to veil.

Azza, along with many other secular activists, is sure that the imposition of the veil and other manifestations of religious extremism, such as the demand for Islamic laws, will not remain after the regime is gone. According to Zeina, Syrian society and “Shami Islam” are known for their simplicity and moderation, and were never extreme.

Mai disagrees, and believes that people must work to combat religious extremism at an early stage so that this phenomenon does not develop into a permanent social norm. Mai and her friends are currently engaged in a social campaign entitled “There is No Force in Religion” aimed at religious extremists in several towns in Eastern Ghouta. Participants will spray graffiti on the walls of the area, distribute brochures, and organize discussion sessions between different groups.

“In the end, extremists are not bad people,” she said. “They are people who have responded to their realities with the simplistic tools at their disposal. They have exercised their survival instincts in this way. Even if these methods are bad and extreme, cultured individuals must deal with them and contain them, for they are the ones with enough awareness to do so.”

Mai expressed her fears at the small number of non-religious activists in Eastern Ghouta who are working to combat religious extremism.