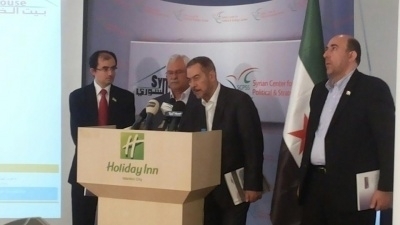 The Syrian Center for Political and Strategic Studies announced in Istanbul on Wednesday the final report on the plan for a democratic transition in Syria, prepared by the House of Experts, which was founded by the Center.

The report was compiled after consultation with some 300 activists, military leaders and members of main opposition groups.

It calls for disarmament of all armed groups in Syria and reconstruction of the security services. Under the plan, a new national assembly would draft a constitution based on the 1950 constitution, which would then go to a referendum for approval.

The report envisions a government with both a president and a parliament to ensure checks and balances to the concentration of power, and recommends the creation of an independent judiciary.

The roadmap comes as the government of Presidnet Bashar Assad has consolidated control over central Syria and around the capital,Damascus.

Head of Transitional Justice and National Reconciliation Committee, Radwan Ziadeh said that one of the recommendations made by Constitutional Reform and Sovereignty of Law Committee is to adopt the 1950 constitution as "the only Syrian constitution (among 15) which was formed and accepted by a national parliament and gained real support from Syrians."

But, he said "this doesn’t deny that it contains some articles that ignore the rights of  minorities, and these articles should be amended."

As for the political system, contributors agreed that it should be parliamentary and that members of parliament (who shall have broad powers) shall form the government. Experts emphasize the importance of activating different parties' role and reforming state institutions. In particular, reform was needed to the parties laws, in parallel with reform of the elections law, which should be proportionally representative.
Constraints on party formation should be cancelled with discrimination and division of the state the only consideration of a violation of the constitution in this respect.

According to Ziadeh, the plan makes recommendations that will guarantee the transformation of Syria into a progressive state by the year 2040.

The recommendations include: Restructuring the army and dismantling the security forces; implementing a new vision for the security system that reflects the reality imposed by the revolution; the formation of a national security council providing Syrian military units with advanced training courses to professionalism and citizens' rights and protection as well as the means to respond to the security needs of  the economy; a gradual transition to an open market economy; tax reduction; job creation, and removal of investment constraints.

One Syrian civil society group said while it supported Ziadeh's team, it criticized Ziadeh's "ignorance" in its work.

The 'Day After' group, headed by Murhaf Gwegati said "setting out a vision on the future of Syria that is not monopolized by one group is a responsibility of all citizens. Consequently, all the experiences and recommendations have a positive effect on adopting a clear way to a bright future."

But the group clarified that it is any attempt to form a vision of the future is a suggestion and should not be used as the definitive article "to make itself the only one specified for the future and destiny of the country."

The group said that "minimizing the efforts of the others to put one project in front is a bad habit that hurts the one who adopts it before the others, especially when it launches a project as important, valuable and effective as that of Dr Radwan Ziadeh."

The President of Syrian National Council, George Sabra, meanwhile, said in an interview with Zaman al-Wasl that the plan cannot be applied as long as Bashar Assad remains in power.

"Firstly, the dictator who destroys the country should step down before starting the reform of state institutions," he said.

Deputy President of Syrian National Coalition, Mohammad Farouq Tayfour said in an exclusive statement to Zaman al-Wasl that "the plan is one which will have a positive effect on international support for the Syrian revolution".

Tayfour pointed out that one of the reasons for the delay  in the international community's support for the revolution was the absence of any clear vision for a post-Assad Syria.