The Syrian government dismissed the reports as baseless and untrue 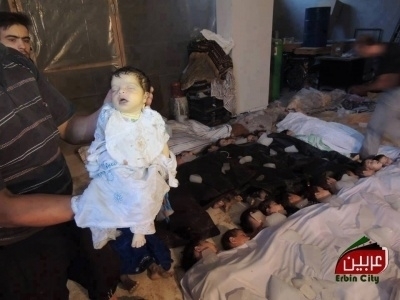 The United States on Wednesday called for immediate access to the site of an alleged chemical attack in Syria where 1,300 civilians were killed, according to opposition activists.

“We are working urgently to gather additional information,” said White House spokesman Josh Earnest in a statement expressing deep concern over the reports.

Syrian activists accused forces loyal to President Bashar Assad of using chemical agents during the heavy bombardment of rebel-held areas around Damascus early Wednesday, but the Syrian regime rushed to deny the reports, labeling them as “lies”.

Activists from the grassroots Local Coordination Committees reported at least 30 bodies had been brought to one field hospital in the Kafr Btna neighborhood a few kilometers east of central Damascus.

The reported use of the chemical agents could not be immediately verified. It coincides with a visit to Damascus by a United Nations team of chemical weapons experts.

The opposition Syrian Observatory for Human Rights said dozens of people were killed, including children, when government forces launched a fierce bombardment. It said Mouadamiya, southwest of the capital, came under the heaviest attack since the start of the two-year conflict.

The Syrian National Coalition called upon the U.N. Security Council to hold an emergency session on the latest Assad crimes against the Syrian people.

“We urge the Security Council to condemn Assad's crimes and issue a resolution under Chapter VII of the U.N. Charter pertaining to maintaining international peace and security to which Assad has undoubtedly become the biggest threat,” it said in a statement.

The Coalition said that Assad forces have committed clear massacres against hundreds of unarmed and defenseless civilians, shelling the eastern and western Ghouta areas with chemical agents.

“The Syrian Coalition calls on the United Nation’s chemical weapons investigation team to head immediately towards the locations in Ghouta where Assad forces have used chemical weapons.”

“Reports by activists in Ghouta have documented the death of around 1100 people due to chemical weapons attacks. Hundreds more are suffering from symptoms of exposure to chemical agents. Many of the victims are women and children. The U.N. team must visit these places, which are only a few kilometers away from where the team is based in the capital Damascus. We ask that the U.N. team visit Ghouta within the next few hours, listen to people’s testimonies, and gather necessary evidence.”

But the Syrian government strongly denied the accusations. The General Command of the Army and Armed Forces accused “biased channels of misdirection of bloodshed have, as they always do, made false allegations that the Syrian Army used chemical weapons in Damascus Countryside.”

In a statement issued on Wednesday, the General Command of the Syrian Arab Army and Armed Forces said the allegations “are completely baseless and untrue, and they are part of the dirty media warfare on Syria.”

The state-run news agency SANA quoted an official spokesman at the Ministry of Foreign Affairs as saying that the cooperation agreement between Syria and the international committee investigating the use of weapons of mass destruction in some areas in Syria “didn't please the terrorists and the countries supporting them, which is why they came up with new false allegations that the Armed Forces used toxic gas in Damascus Countryside.”

The spokesman said that the Foreign and Expatriates Ministry confirmed that the allegations “are false and untrue” and said the ministry “would like to point out that Syria has repeatedly announced that it will never use any weapons of mass destruction against its own people, if such weapons exist.”

Britain and France said they would raise the reported chemical weapons attack by Assad’s forces at the United Nations Security Council and called on Damascus to give U.N. inspectors access to the site.

“I am deeply concerned by reports that hundreds of people, including children, have been killed in airstrikes and a chemical weapons attack on rebel-held areas near Damascus,” British Foreign Secretary William Hague said in a statement.

Activists blamed the international community and particularly the administration of President Barack Obama for allowing Assad to use chemical weapons.

“It’s not Assad who killed hundreds of people in Ghouta today,” wrote one activist on Facebook, “It is President Obama.”