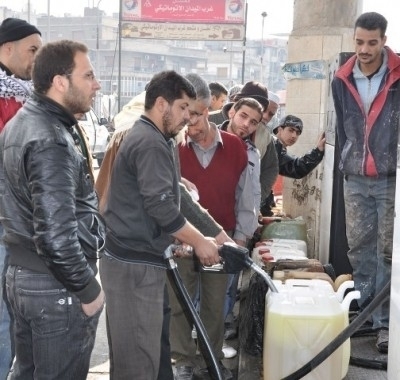 With winter approaching, Syrians are still perplexed about how to secure diesel fuel for heating.


Government promises have been made to distribute 400 liters of fuel to each family at the official price of 60 Syrian Pounds, but as yet there has been no confirmation that this will happen and no word on the distribution method.


Some wealthy families have begun to buy diesel on the black market at a price of 90 Syrian Pounds for a liter, for storage. However, this is out of the reach of most Syrian families, who can barely secure food for their children.


Most Syrian families will spend a cold winter, and those that are displaced will suffer the most.


“The Syrian regime is vague about most issues and that applies to diesel distribution as well," said one economic analyst.


"They have stated that diesel will be available in sufficient quantities, but there was no indication of the exact figure, the distribution mechanisms and who will be eligible for fuel at discounted prices.”


The economist said the regime tends to delay processes and is dishonest in publicizing numbers and facts, never revealing the true amount of diesel available, nor the amount that is allocated to the army and the families of pro-regime forces.


There are also difficulties in delivering diesel. Transport between provinces has become very dangerous and many truck drivers reluctant to do it.


The economist said that last year the government disbursed only half the promised amount of 400 liters to each family, delivering only 200 liters at the start of winter.


The economist said Syrians are expected to suffer severely this winter –  even more than last year.