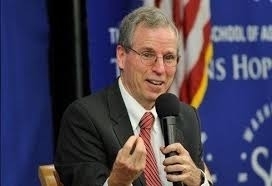 Former U.S. Ambassador to Syria Robert Ford said on Thursday that the American military strike will not topple Bashar Assad but will be a disciplinary strike that could make him more stubborn, an opposition dissident told Zaman al-Wasl.

The decision by Washington to launch a strike has been made, Ford said in private meetings with members of the opposition Syrian National Coalition, the dissident, who refused to be identified, said.

The U.S. attack will be in the next couple of days, Ford said and will target Assad's military strongholds such as intelligence headquarters, missiles bases and military airports, Ford told the source.

Ford believed that such a strike would weaken Assad's leverage and force him accept negotiations at Geneva II for a peaceful transition of power.

The Coalition member told Ford Assad will not accept negotiating his departure.

The American diplomat called on the Assad regime to end the fighting and bring about a peaceful solution to the crisis in Syria.

“When we see disturbing photos offering proof that the regime is using mortars and artillery against residential neighborhoods, all of us become even more concerned about the tragic outcome for Syrian civilians,” he wrote once on his Facebook page.