Anyone who comes to us to repent before we capture him, we accept his repentance, or else we are determined to uproot them

This is an interesting letter issued by the Al Qaeda affiliate in Syria ISIS about its battles in Azaz, Aleppo, against the Free Syrian Army's group, Asifat al Shamal (Northern Storm). 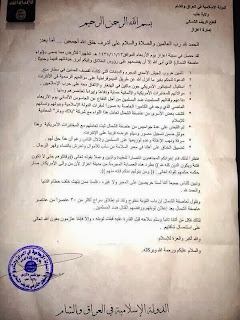 On Wednesday, we purified the land from what is called Liwa Asifat al Shamal, which God wanted to expose them in front of everyone. These are some examples of their treason before and now:

1. They secured the departure of the Assad army and its tanks that were shelling civilians in Menagh military airbase (which fell after the ISIS sent suicide bombers to kill its defenders on August 5).

2. They called for rule other than what God has prescribed, through democracy, on their official websites.

3. They received Senator John McCain in 'the hangar' and they agreed with him to fight the Islamists.

4. They fought fiercely against Muslims to defend the German spy (presumably a German doctor who helped in medical aid) on Wednesday whose camera had images of the ISIS headquarters, their houses and their women

5. One of the prisoners from Asifat Al Ashamal revealed that the group worked with BlackWater, the anti-Islamic company.

6. A few spies were captured from Asifat al Shamal and we had evidence they worked with the American intelligence and this is documented in a video that we will release online soon.

7. They stole and robbed without distributing the goods on Muslims. They humiliated people although the goods belong to the people.

8. They suffocated people on Salama crossing by taking their money, harassing women and humiliating men.

Based on all that, our jihadi brothers fought them and expelled this criminal gang from Azaz because whoever aligns himself with the Americans will be with them.

We assure people that we are not interested in the border crossing or indeed anything else. We say to Asifat Al Shamal that the door for repentance is open and we have released 30 of their members after they repented and pledged that they will not fight Muslims again.

Anyone who comes to us to repent before we capture him, we accept his repentance. Or else we are determined to uproot them.