The people demonstrated a fatwa that permits eating cats was announced 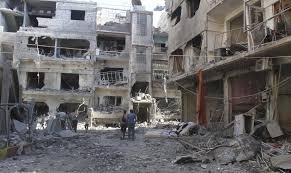 Activists in the Yarmouk refugee camp in Damascus told Rihab News that the Sheikh of the Palestine Mosque, located in an area that has run out of food after remaining under siege for more than three months, announced a fatwa from the mosque’s minbar stating that it is permissible to eat the meat of “cats, donkeys and dogs” for those trapped in the Yarmouk refugee camp after they reached an a stage that will lead them to death.

The people of the Yarmouk refugee camp demonstrated after the fatwa was announced.