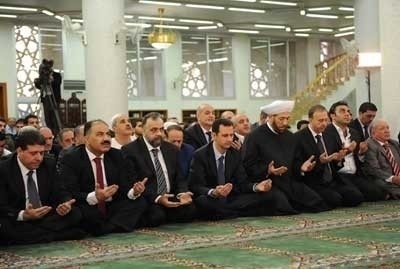 Also [joining him] in prayer were senior state officials, ranking members of the Baath Arab Socialist Party (BASP), a number of the People's Assembly members, Syria's Grand Mufti, several Islamic scholars, and a crowd of citizens.

The prayer was led by Sheikh Mohammad Tawfik Ramadan al-Bouti, Chairman of the Levant (Bilad al-Sham) Unio. After the prayer, the President listened to the Eid sermon which stressed the sublime meanings of Eid al-Adha, pilgrimage to the Sacred House of Allah (the Hajj), and the importance of love, fraternity and unity among the homeland's people.

The Sheikh noted that Islam unifies the word of the nation rather than dividing it and that extremism breeds only extremism.

"Any logic that adopts terrorism, exclusion, and mass killings as an approach is unacceptable in our home," Sheikh al-Buti said.

He also stressed the need to restore the correct understanding of Islam, whose features some people have tried to distort.

Sheikh al-Bouti emphasized the necessity of deepening the young generations' belief in God to remove the misunderstanding left by scenes of terrorism, murder, and destruction.

He also thanked the Syrian army personnel who sacrificed their blood for the safety of the nation.