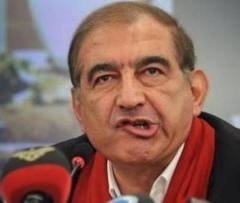 That, however, comes in addition to his activities and meetings outside the homeland borders without coordinating with the government and overcoming institutional work and the general state structure, the presidential office decided to exempt him from his office."

Furthermore, the Minister Omran Al-Zoubi stressed that the issue with Dr. Jamil is a procedural and legal matter in the first place. Then Al-Zoubi said while on a phone call with the Syrian Arab TV that "Jamil represents an opposition party" then he continued explaining that Dr.Jamil had commented about the news about his exempting that he "wants to give his full time to his political partisan job", Al-Zoubi then concluded saying "and that's his right".

Al-Zoubi also explained that Dr. Jamil had practiced political activities that are in line with his political visions but not with his presence as a member of the government.