Women have paid the highest price in the Syrian war 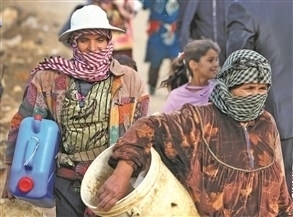 The Syrian people's revolutionary movement has stumbled, and the outcome is set to change all facets of life, while political tyranny strengthens on the foundations of new tyranny.

The violence suppressing people's demands for freedom and justice, built upon equal citizenship for Syrians bore a new violence and Syria has now slipped into a disastrous war. It is a war that opened all borders to allow allowed all kinds of death; not only with weapons, but with Jihadist ideas of fighters created in modern laboratories and delivered to areas where there are conflicting powers.

Those Jihadists entered Syria, controlling some regions while declaring them liberated and began to rule according to Shariah. Despite the fact that Shariah was open to modification 1,400 years ago, they froze it in time and declared their state according to that version of religion and Shariah.

This hindering mentality which was forced upon some Syrian provinces is based on hopes to control as much as possible Syrian territory and has applied its social forms on citizens. The rules are decided by judges, but no one knows the scientific or moral qualifications of those judges. They attempt to apply certain ideas through their behaviors, their positions and institutions – but their ideas kill creativity and do not differ from those applied by the former totalitarian regime which tried to dominate people in its modes of thought and values.

Women are a particular matter of concern for those groups as they advertize a specific model of Syrian woman.

The Syrian woman paid the highest price for the Syrian war; she has been unable to make decisions and was affected by those of men.

The war obliged her to be the mother or sister or wife of a martyr. She was forced to leave her home, her land and her country to find herself displaced or as a refugee, suffering all kinds of humiliation.

Women have also become a perfect Jihadist tool. Religious scholars from all sects dedicated their knowledge to issue the fatwas that turn women into shields or military targets and humiliate the honor of the other parties. Jihadist fatwas have been used to use the bodies of women to strengthen the wills of Jihadists, while others legitimized polygamy using the excuse that the number of men is decreasing. They ignored the human side of women and the experiences of nations looking forward to life, not to death.

In the case of Germany, women rebuilt Germany after World War II, which resulted in an extreme shortage of men. Those women were called the “Women of Rubble", but religious scholars didn’t issue fatwas then to allow each man to marry fifty women!