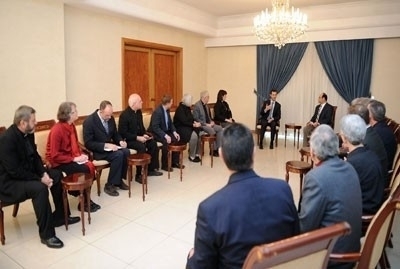 President Bashar Assad said that Syrian society, which has been known for its amity and tolerance for centuries, will never accept the Wahabi and Takfiri mentality, adding that not only does this dangerous mindset  threaten Syria, but also the entire region.

The remarks came during Assad’s meeting with a delegation of the Anglican Church, comprising clergymen from the US, Sweden, Switzerland, Lebanon and Syria, headed by Amgad Beblawi, Mission Coordinator for the Middle East at Presbyterian Church in the US.

Assad said that one of the main problems regarding the Western, and particularly the US, approach in dealing with the region’s issues is that most of their leaders are incapable of understanding the complexities and reality of the region and the interests of its people.

Assad stressed that the majority of Western leaders are working to achieve their narrow interests, which differ greatly with the interests of the people of the Middle East.

For their part, members of the delegation expressed their solidarity with Syria and rejected any foreign intervention in Syrian affairs, adding that they hoped peace and security will again prevail in the country, which has long been a model of cultural and religious diversity.