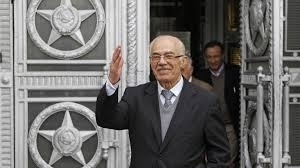 High-profile figures from Syria's two major opposition groups will meet in Egypt's Cairo Thursday to discuss broader representation of the Syrian opposition at the second round of talks at the Geneva II peace conference, a Syrian opposition leader said Tuesday.

"Hasan Abdulazim along with Safwan Akkasheh (another member of the NCC) will head to Cairo to meet with other opposition groups, mainly the coalition and its leader Ahmad Jarba" he said.

He added that the meeting aims at finding a "mutual mechanism" for broader representation of the opposition in the next round of the Geneva II talks, due to open Monday.

The opposition groups have complained that they were not invited to take part in the Geneva II conference as independent entities. The U.S., one of the sponsors of the conference, said that other parties could participate under the Coalition umbrella.

The opposition groups, mainly the NCC, said previously there was no way they would partake under the Coalition umbrella, demanding an equal representation in a unified opposition delegation but not in the Coalition's shadow.

The first round of talks wrapped up last Friday with no results.