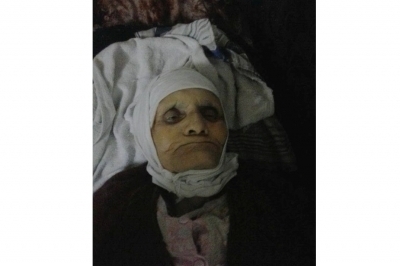 Umm Faris al-Shibli, who fled the embattled city of Aleppo with her family to settle in the Old City of Damascus, was a victim of Assad's regime brutality, activists said.

The woman had defeated age only to die when number of pro-Assad thugs, nicknamed "Shabbiha" stormed her house on 22 January in the Bab Sharqi neighborhood, near the eastern gate of Old Damascus.

Mohammad al-Shibli told Zaman al-Wasl his mother, who was born in 1909,  fled Bab al Neirab in Aleppo nearly a year ago.

"Through my contact with my relatives, I have learned that regime’s forces entered her house for inspection at half past eight on the evening of 22 January while she was sleeping on the bed," he said.

"A solider ordered her to stand and when she told him she couldn't, he threw her to the ground and punched her eyes and then kicked her with his feet with no consideration to her  illness or age, which exceeded one hundred and five years, or the fact that she had asthma and coronary heart disease, leading to her death."

"When I was living in Aleppo, there were frequent raids on our house searching for me, and after that I sought a refuge in Jordan, then my sister and I fled to Damascus," Mohammad continued.

Umm Faris is the grandmother of young activist Faris al-Shibli, who was sentenced to death by regime authorities over charges of participating in Syrian revolution in Bab al-Amr, Homs.  Zaman al-Wasl published a report about him months ago.