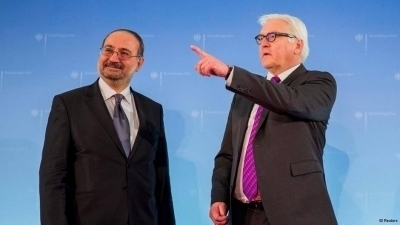 Frank Steinmeier, the veteran diplomat and German Minister of Foreign Affairs, made the suggestion during a meeting  with the Interim opposition Prime Minister Ahmad Toumeh last month. He also commended the opposition's participation in Geneva talks in January.

Steinmeier insisted on Assad’s participation in the transitional period, urging Tomeh to find a half-way solution and to accept Assad’s representation even for a short period, the source said.

Steinmeier told Toumeh: “How would you expect Assad to stop fighting, while he knows he would be sent to the International Criminal Court, as you are calling for constantly,” the source said.

The German invitation to Toumeh was aimed at discussing the idea and delivering Germany’s point of view in the Syrian crisis, as it refused to supply the opposition with arms, but instead provides indirect financial support.

Translated and edited by The Syrian Opposition