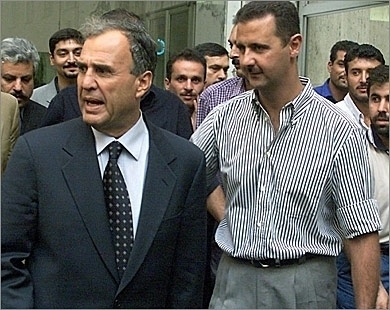 The Memory of Syrian Intelligence, a program broadcast on Orient TV, has revealed how security forces control the various aspects of political, economic and social life in Syria.

It also revealed the role of officers supervising these forces and the mechanisms for their appointment and position in relation to Bashar Assad.

The program recently hosted Brigadier General Nabil al-Dandal, an officer with the Syrian political security department, who headed the Political Security branch in Latakia from 2003.

Al-Dandal said that "Major General Ghazi Kanaan was the absolute governor of Lebanon for more than two decades. He despised Bashar Assad. Hafez Assad trusted him, even though he was one of the most controversial figures among the security leaders. Some intelligence officers referred to his belief that Bashar Assad was naïve in politics, and that whoever rules Syria must be political, par excellence, and that Bashar Assad is not qualified."

Al-Dandal said Brigadier General Ghazi Kanaan believed that Bashar Assad is not worthy of the presidency and that he coordinated with Abdel-Halim Khaddam to become a president.

Regarding Kanaan's assasniation, al-Dandal said that Bashar Assad sent a team to kill him, and that in coordination with the director of Kanaan's office, they had him killed using silenced pistols, shooting him in the mouth then putting the gun in his hand.