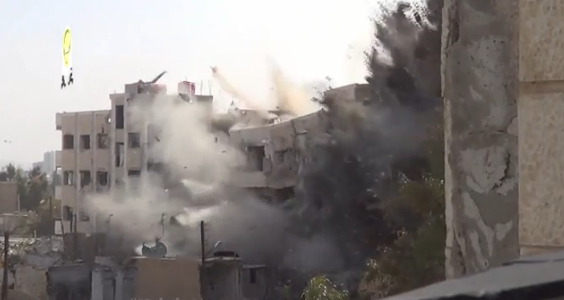 The Jobar neighborhood, east of the capital Damascus, has been exposed to an unprecedented attack from regime forces and militias, coinciding with heavy shelling on the neighborhood which is the closest rebel stronghold to the capital.

Activists have broadcast video footage showing rebels blowing up a whole building full of regime forces on the outskirts of the neighborhood, killing many of them.

The clashes have spread to Abbaside Square and its surrounds, while the sound of explosions was clearly heard across the capital.

Not far from the capital, at the front of Mliha in eastern Ghouta, severe clashes were also witnessed, during which the regime bombed the town with missiles.

Mliha is considered the gateway to the eastern entrance of Damascus, and the regime is committed to besieging it and tightening a ring around it, fearing that rebels stationed in the neighborhood may infiltrate the capital.