The Syrian Revolution has lost one of its greatest mothers 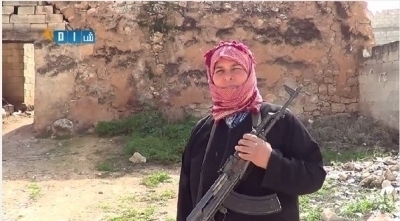 Mariam Sharif remained virtually unknown, as she did not care about fame or appearing before the cameras.

But Sharif, or Umm Ismail, from Kafr Nabodah in Hama, was a unique icon for women, who sacrificed her time, effort and life for revolution, givinng all she was able to give.

She was arrested by the Syrian regime security forces, and spent about a month in prison, where she met her informer who, she was shocked to learn, was from her neighborhood and had betrayed her.

Umm Ismail was killed on the front while helping rebels. She lost her two brother in fighting as well.

Umm Ismail participated in aid and relief and would give away aid she received to those in greater need.