Assad says the military front is at a "turning point" 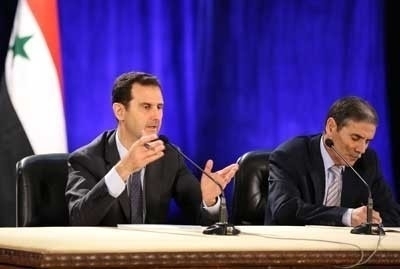 President Bashar Assad said on Sunday that the intellectual war and attempts to abolish and replace identity constitute the gravest aspects of the colonial aggression targeting Syria.

Assad was speaking during a meeting with the teaching staff and post-graduate students at the Faculty of Political Sciences in Damascus.

The Arab region is originally based on an ideology of correlation between Arabism and Islam, the President said, "which makes adherence to this principle one of the most important factors for restoring intellectual and social security to Arab societies."

The West has sought to abolish this ideology so as to dominate the region and the role of Arab countries, he said. Having failed to do so, the President said, "the West turned to play on concepts to alter the essence of that ideology."

Assad said the intellectuals and academics have a role in looking into concepts and furnishing them with clear meanings in order to confront attempts to market different interpretations that seek to empty ideologies of their content.

"This risks a loss of belonging and deviation from principles causes for which we have been struggling for decades," he said of those attempts.

Syria is targeted, not only for its weighty geopolitical position, but also for its pivotal role in the region and the sway it has on the Arab street, the President said.

He indicated that the war against Syria is an attempt to control its sovereign decision-making and weakened it in order to reverse its policies that meet the aspirations of the Syrian people and are out of line with the U.S. and Western interests in the region. This, the President said, explains the emergence of the Israeli factor that has a major role in backing terrorist groups.

Assad said the crisis in Syria is at a turning point on the military side due to the continuous achievements of the Syrian army and armed forces in its war against terrorism. On the social front, he pointed to a turning point in terms of national reconciliation and a growing popular awareness of the aggressor's goals.

The Syrian state seeks to restore security and stability to the main areas rocked by terrorism before turning to strike pockets and dormant cells.

There was also been dialogue during the meeting about the importance of universities, as well as scientific and strategic studies' research centers in providing the state with qualified cadres.