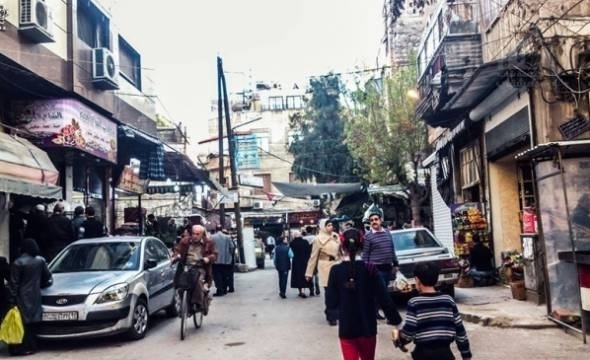 Even a grave could soon become unaffordable in Damascus as housing allowances sharply increase.

“It is even impossible to find an affordable grave in Damascus,” says Mohamed, when asked about the housing rentalcrisis in Damascus.

Damascus has become extremely populated recently, as a result of the increasing numbers of displaced people from Damascus countryside and other cities targeted by the regime.

Real estate agents and people looking for houses to rent in Damascus mentioned that a furnished now ranged between 75,000 and 100,000 Syrian Pounds.

“It is a huge amount of money and not affordable to many; even businessmen cannot afford it, nevermind the displaced people who cannot find a source of income after losing everything before leaving their homes,” says Jalal, a displaced man with his wife and a family of three.

He says that he had been living at his sister’s home with her family for four months, after they were forced to leave the rented house, hoping to find another or even a studio to rent.

Real estate agents have started issuing notes about a shortage of houses to let.

"It is almost impossible to find a house to let, as demand is much higher than supply, some letting offices took a chance of the crisis and people’s need for houses to raise the allowance,” says Samer, a real estate agent.

To control the flood of displaced people to Damascus, the regime has started demanding all people who rent houses must register themselves at police stations to make sure that there is no wanted people among them.

Later, a security clearance from one of security branches has become mandatory to complete the tenancy agreement; it might take at least 15 days, which needs details about each person and reasons behind coming to Damascus.

Khalid, a displaced man from Homs, after agonizing search for a house, was refused the security clearance needed for tenancy agreement in Shiekh Mohiddin area, which is known as the area of the Branch 40, the security branch headed by Hafez Makhlouf.

“It seems that Hafez Makhlouf think Homsi people have come from Israel, so he refused letting them live in his area,” Khalid said sarcastically.

In its latest report last month, UNCHR considered Syria to be the world's leading country of forced displacement, with more than 9 million of its people have left their homes.

“As of today, 2,563,434 Syrians have registered as refugees in neighboring countries or are awaiting registration. With displacement inside Syria having reached more than 6.5 million, the number of people in flight internally and externally exceeds 40 per cent of Syria's pre-conflict population. At least half of the displaced are children” the report details.