The campaign describes the election as a "mockery" 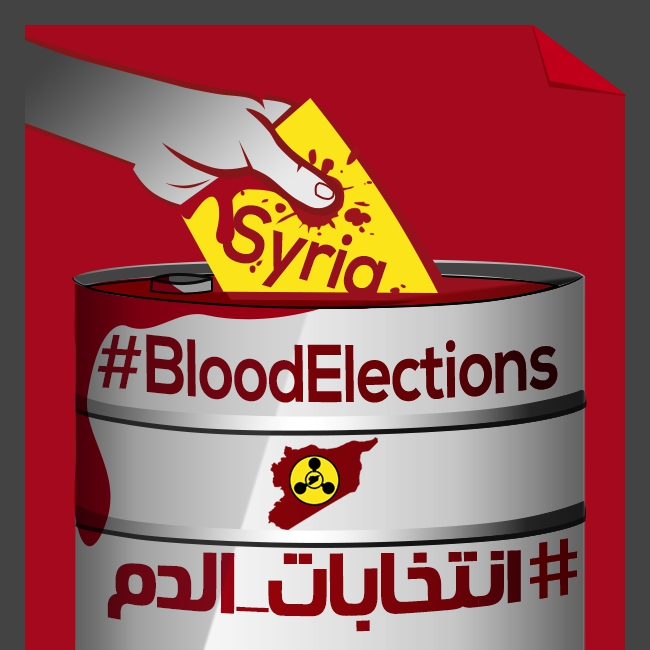 Syrian activists have launched a media campaign on Facebook referring to '#BloodElections'.  The hashtag, which has spread widely,  shows opposition to the election scheduled by Bashar Assad and his supporters in Syria.

The election is being arranged against everybody’s will and over a sea of Syrian blood in order to reproduce the same dictatorial familial regime, ignoring the obvious violations against the Syrian people.

A letter released by the activists behind the campaign issued a statement saying: “In parallel with the international community's disregard for all the live war crimes taking place in Syria, the organized criminal gang continues its political and media farce. In this context comes what the gang calls a 'presidential elections'. Everybody considers this step as a form of defiance of Syrians' demand for change, choosing their leaders and not a sign of democracy.”

The statement continued, explaining the goal as "to view the whole picture of these elections to the world", describing them as "a mockery while  explosive barrels are raining down on civilian homes, the smell of the chlorine gas is in children lungs, air strikes, storms uprooting millions of refugee tents and death and hunger that has eradicatied tens of thousands of people under siege or in prisons of fear and terror."

Hazem Dankal; one of the campaign coordinators said that the participants are various activists inside and outside Syria. They wanted to express the viewpoint of millions of Syrians about the presidential election meant to take place after the constitutional adjustments made by the Assad regime early in 2012; one year after the revolution began.

The election certainly has no legitimacy; how could a regime or a ruling power supervise elections when it is applying this level of brutal violence on the people?

More than 200,00 thousand people have been killed in the rebellion people because of the authorities’ unjustified fury, while many more are in prison. Millions of refugees outside the country have no passports or even identity papers, thus the majority of the Syrians cannot vote. These elections, therefore, must be considered as for the regime and its supporters and not of the Syrian people.

About the campaign and the goals Hazem says: “the target is the public opinion in the Arab and foreign countries. Everybody must understand that the Syrian people will never accept faking their will or ignoring all the blood and sacrifices. People inside Syria do not really need to be objected after what they have been witnessing daily; they understand al-Assad game very well and know that who killed all these humans and did all these massacres knows nothing about democracy. In addition, there will be motivative programs for sit-down strikes and other activities outside the country to say to everybody that the Syrian people flatly refuse these elections because it is going to be held over bodies and blood.
Most of the campaign’s participating activists are inside Syria. And they are remarkable people in the revolution as coordinators refer. The activities inside will be peaceful movements in the liberated areas. Some symbolic activities will be held in the areas under the regime control; such as walls writings and posters distributing especially in Damascus.
Many revolutionary civilian organisms and coordinations will enroll; such as the Syrian revolution against Bashar al-Assad page. Sami Akkad, a supervisor of the big leading page, says: “the ambition is that the campaign will be global because it is a true humanity scream against injustice.” The activists also aim to recruit famous figures from the global in order to expand the size of effect. Akkad adds: “many Syrians wishes to say- NO- for the elections, therefore many other campaigns have started. However, they were not well organized, so we have been concentrating on uniting the efforts to have one strong project that’s for every free Syrian.
About the continuous peaceful activity in the time of the loud battles al-Akkad says: “the peaceful activity will surly continue, and this campaign reinforces that movement and proves that we can restore civilian act and find in common ideas between activist and try to work on them till success.
Yousef al-Bustani is a media activist who is working hard beside his fellows to prepare a media report that includes the people opinions about elections. Al-Bustani describes the positions of the stratum which was targeted in the report: “people here are exhausted from endless siege, killing, explosive barrels, shelling and even assassinations. They do not think about the elections at all or even in campaigns against them. The elections simply do not mean anything to them because they see Bashar’s democratic actions everyday through shed blood and daily bodies.
Al-Bustani asks: “whom these elections would take place for? And who will elect this criminal who drowned more than 14,000 people in their blood just here in Eastern Ghouta? Who would have the chance to break the siege only to elect the tyrant here and in other out of regime’s control areas? More than 1,150,000 people besieged just here and millions of refugees in and outside the country, so we want this world who is faking blindness to see the truth of over a sea of blood elections.
#bloodelections