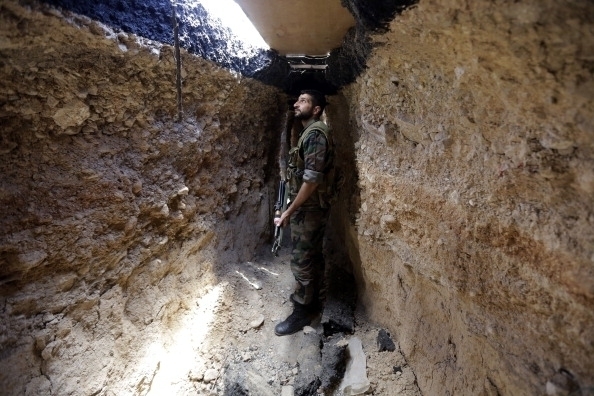 A source from inside the conference said that political opposition figures from inside Syria and abroad aim to form a 'Rescue Movement' and that the principles and mechanisms for the conference would be open for all to discuss and will be governed by transparency and coordination by all.

The source identified the authority fo rthe conference as a political body working to regain a national decision and safeguard it from the attempts to manipulate it, as well as protect the Syrian revolution's achievements and work to reunite all political and military forces inside and outside Syria.

The source described the authority as a "legitimate framework that needs to include all the political, social and professional components of Syrian people to produce a public, political and revolutionary leadership, and to form a new body where all its members stand hand in hand to regain the national decision that has been controlled at the expenses of the Syrian people."

The source revealed the goals of the body are to include all the political bodies and authorities and civil gatherings, including revolutionary committees, professional councils, relief and charity agencies, media, scientist and religious figure and all people who work for the benefit of Syria.

The source said the authority is now discussing the principles of the conference and summarized them in 16 points:

1. To confirm the real democracy in Syria where people make the decision for their lives and not the leaders.

2. To maintainhuman rights that have been breached so many times for more than three years through detention, torture and killing.

3. To defend the political and economic rights of the Syrian people withot discrimination.

4. The country is for all and there should be no discrimination or exclusion for any party in Syria. Rights are protected for all.

5. Rejection of the recent disunity, which has led the revolution to this bad situation, whichneeds lot of work to help regain power and control.

6. The conference’s political work must be open, away from any financial or moral pressure, and must stop the accusations against others to work collaboratively with all those who are keen to benefit the country.

7. The conference believes in freedom for all Syrians without discrimination. The revolution broke up after years of suppression and injustice, but will achieve social, political and economical agreement to found a civil community and country ruled by law.

8. Work on developing the Syrian community from the moment the conference is held. All people in the community will be part of the process to improve people, not only organizations, to lead to a national community for all and a base for the national conference to tackle challenges to liberal and dignified life.

9.To keep the honorable and respectful Syrian identity without discrimination, whoever the person is.

10. The conference confirms that Islam is a belief that joins all factions and groups together, is an advanced religion that applies to all times and  places. It governs the community because it identifies a person’s rights and duties.

11. Islam is equality between men and women, therefore, the conference will respect al women’s rights –  not because of the international interest in the matter –  but because it is the recommendation of Islam.

12. The detainees’ case is one of the most important issue for the conference. It will make every effort to free all detainees and work to improve their detention circumstances until they are freed.

13. Work to find a civil reconciliation and establish its bases and to start treating personal and community traumas and wounds.

14. The conference calls to stop all exclusionary practices, besides uniting all the military forces under one leadership and under the name: “The National Syrian Free Army".

15. Work hard to gather all political intellectuals within a united national framework.

16. Call on all military forces to protect people and property, besides calling all Syrian people abroad to work together for the interests of their country.