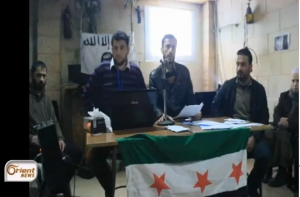 After six months of negotiations, a new grouping of political organisations called the Aleppo Revolutionary Union (ARU) came into being in this northwestern city in early March.

The umbrella group brings together several opposition organisations that were working on the ground in Aleppo before the Free Syrian Army appeared there. They deliver development work, media, and medical and social services for opposition fighters.

In an interview with Damascus Bureau, the director of ARU’s political bureau Muhannad Ghabash said the new body was seeking to “eliminate fragmentation and form a bloc that has a common view in order to serve the revolution and help overthrow the regime”.

Ghabash says that ARU’s activities to date include building a wall to protect pedestrians from snipers, setting up a medical centre near the front line to treat injured fighters, and providing foodstuffs and clothing for rebel forces at the front in the Salaheddin and Saif al-Dawlah neighbourhoods.

On Mother’s Day and on the third anniversary of the 2011 revolution, ARU paid tribute to “the mothers of the revolutionary martyrs”. It also helped organise the Revolutionary Scribbles graffiti campaign, which aims to “restore the spirit of revolution to Aleppo”.

By early June, ARU had 570 individual members, from 23 opposition groups that include pro-opposition trade unions like Engineers for Syria, Free Lawyers of Aleppo, and the Free Medical Association of Aleppo and its Environs.

Internal regulations issued in May, a copy of which was sent to Damascus Bureau, state that ARU is “an independent, national revolutionary organisation that constitutes a legal entity. It unites all the rebels in the city of Aleppo and the surrounding countryside who have taken part in the revolutionary movement since its inception and who have proved that they have not deviated from the principles and goals of the revolution”.

The document says the group’s objective is to “overthrow Assad’s regime and all its symbols, maintain the unity of the Syrian nation and territory and the Islamic identity of the state; and work on the application of tolerant Sharia law in all areas of life”. It also envisages the creation of a political bureau which will follow events in Syria and abroad and issue statements on behalf of ARU. Finally, the document stipulates the creation of a Revolutionary Movement Bureau to handle communications with revolutionary councils and coordinate demonstrations.

The launch of ARU was not, however, without its teething problems. At the founding meeting in March at which union officials were elected, several activists withdrew, saying their groups were under-represented. The largest organisation to withdraw from the meeting, the Revolutionary Council of Salaheddin, has yet to return to the fold.

The head of Aleppo’s pro-opposition council, Abdul Aziz Mughrabi, has warned ARU’s leaders “not to repeat the mistakes of the past by turning it into [merely] a service-providing organisation”. Instead, he said – speaking in a personal capacity – that ARU should be a revolutionary media and political organisation, carrying higher authority than the local council, whose responsibility is to provide services.

Some activists believe the problems faced by ARU are a reflection of the kind of difficulties that opposition organisations have experienced more generally.

According to Abu Ahmad, a former member of the Assistance Coordination Unit, the aid arm of the Syrian National Coalition (SNC), “The problem is not just about this city; it’s a general problem affecting even the [opposition] government and the SNC.”

Abu Ahmad said that the opposition organisations he has worked with in Aleppo have “no strategy”.

“We don’t know where we stand now or where we’ll be in future,” he said. “We are going through a transitional period, but we have to be mindful that goodwill and love are not enough to build an institution.”

Abu Ahmed said nascent opposition groupings tended to appoint officials with a background in activism rather than because of their qualifications, a problem exacerbated by the fact that most people with the right management skills have left.

One of the challenges ARU is facing is how to locate funding.

On this issue, Abu Ahmad said, “Is there a neutral, independent national party that is concerned about building the country? Unfortunately, no such party exists.”