Alma Shahhod dedicated her life to relief for the Syrian people 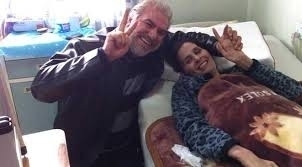 Alma Shahhod, considered an icon of the Syrian revolution has died, alone and unnoticed in Amman this week.

Shahhod was once well-known for her courage and dedication to her work in relief and assisting the wounded in Syria. She spent nine months in Akela hospital, paralyzed with a spine injury that required large doses of analgesic and causing her to develop deep skin ulcerations because of long periods in bed.

She desperately wanted to return to the Ghouta neighborhoods of Damascus suburbs to die, but her wish couldn't be fulfilled, according to Mahmood Sadaka, an activist who helped Shahhod get her official papers from UNHCR.

Shahhod was pregnant at the time of her injury. She gave birth in hospital but her newborn baby was kept away from her.

Sincere and deep condolences poured in for Shohhod, including from Sheikh Moaz Khatib, the former head of the Syrian National Coalition, who said that she was "one of the greatest women of the Syrian revolution, and what happened to her is hard to believe."

"She suffered a lot, but kept fighting, she helped many people and had their support. Others let her down and neglected her, leaving her to die alone after life full of courage and dignity," Khatib said.

One Facebook user, Rawya al-Aswad, detailed the neglect Shahhod faced in death;  no one was even there to lay her body to rest, other than a  nurse and three others.

Abo Fahed Ghadir, an activist who worked with Shahhod, confirmed that he went to the hospital where Shahhod was interned, and met Umm Ratib, the nurse who was looking after her.

The nurse told him that only one female relative and another young man used to visit Shahhod. Umm Ratib confirmed that she called those visited before Shahhod died, but no one came to help. No one from the Coalition or the Interim Government called on her.

“Unfortunately, most people are looking for fame at the expense of the wounded, and when they need their support, they disappear. In her last days, Shahhod was very depressed and refused food. I told relief agencies and workers, but nothing was done and she died in the end," he said.

Abo Fahed said that added that in Akela hospital there were many stories from injured Syrians who served the revolution. In the end they have been treated with neglect, ignored without anyone to look after them.

“Despite all the captions we see on Facebook for committees to help injured and the needy, in reality there is no onw there,” he concluded.