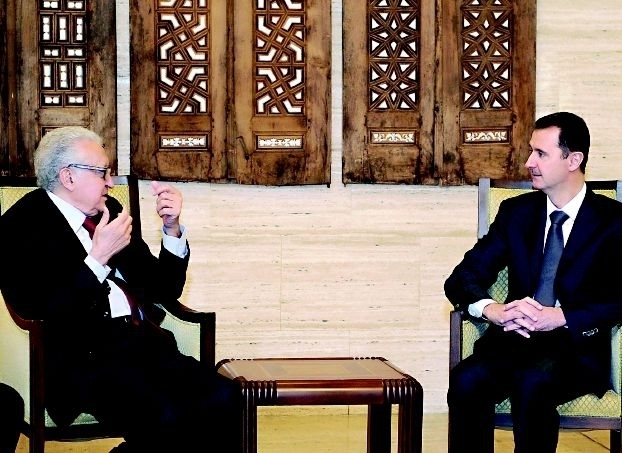 The former International and Arab envoy to Syria, Lakhdar Brahimi, has described the Geneva I statement as "superficial and consensual", and said the failure to convert it into a Security Council resolution revealed the size of disagreements between the United States and Russia, which made any progress towards the "transitional phase" impossible.

Brahimi justified his acceptance of the "almost impossible, if not impossible" mission by saying that the United Nations can not resign from its responsibilities because failure is likely or unlikely. Brahimi was speaking to al-Hayat in a comprehensive interview to be published in a series from today onwards.

Brahimi said he told President Bashar Assad that "our countries need change, and our people feel that we have disappointed them and their hopes, that we did not give them what they expected from us. That is why they are waiting for a change".

He said that he had tried more than once to meet the Vice President Farouq al-Sharaa, but his attempts were blocked by the official position.

Brahimi said that Sharaa might have been harmed as a result of the statements made by Turkish Foreign Minister Ahmet Davutoglu who called on Assad to delegate his powers to him.

Brahimi said that Russian Foreign Minister Sergei Lavrov refused to play any role in persuading Assad to step down or not to run for a new term. He quoted Lavrov as saying that: "Our influence on the man is less than what many believe, our influence on Bashar is less than the influence of the Americans on Benjamin Netanyahu."

He said that the opposition, which felt victory in 2012, considered the talk about a political solution an attempt to help the defeated party, and the same thing happened with the regime when it began to improve its positions in 2013. Brahimi said the regime dealt with the crisis as a foreign plot and a battle against terrorists, while the opposition thought that any actual solution starts with the departure of Assad.

Brahimi said he was surprised by the military intervention of Hezbollah in Syria, because the legitimacy of Hezbollah weapons comes originally from its resistance against Israel. Brahimi considered the participation of foreign militias a confirmation for the sectarian nature of the conflict.

Brahimi said that Syria's return to its situation before the outbreak of the revolution is improbable, saying: "It is impossible to go back after all this disruption, destruction, killings, arrests and torture. The problem cannot be solved by saying let bygones be bygones and let us go back to the past. There must be a change, a real one".

Brahimi denied that he thought at any moment in arranging a "Syrian Taif", similar to what happened in Lebanon in the 1980s.