Looking at people’s tired faces, it seemed as if poverty was revealing itself. 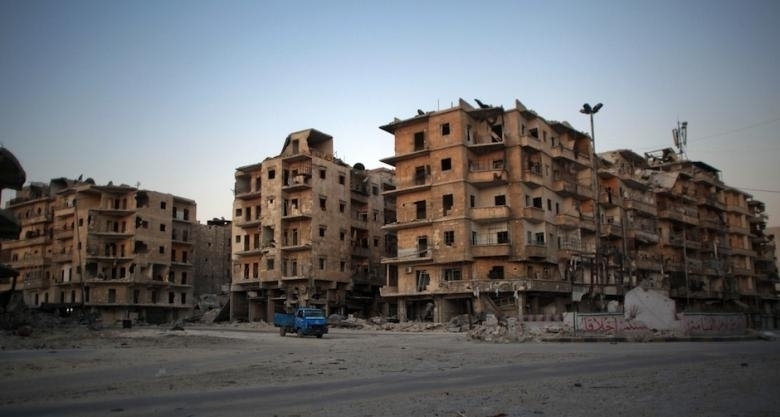 Although the city of Aleppo has never stopped complaining about the government’s neglect of its demands and aspirations, the critical situation in Syria’s northern district came from the poverty stricken countryside. Nevertheless, the situation continued to worsen under the watch of successive governments, and eventually turned into a matchstick that started a fire that burnt everything in its path.

Aleppo countryside – On the road leading to a private cement factory that had just started functioning when we visited it four years ago, in the town of Ain Arab in Aleppo’s countryside, it felt as if were we were traveling back in time to at least the first half of the twentieth century.

There, most houses are made of mud and dirt roads are still unpaved, even schools were almost unrecognizable had it not been for a few children playing in yards fenced with a thin iron wire, usually used for chicken coops.

Looking at people’s tired faces, it seemed as if poverty was revealing itself.

Two years after Aleppo got entangled in the crisis, many asserted that the huge development gap that existed between the city and its rural areas, as well the governmental interest in the city at the expense of its surroundings, were behind the severe level of hostility that Aleppo’s economic and services facilities were subjected to as they came under widespread sabotage, destruction, theft and smuggling.

Official statistics concerning the situation in Aleppo’s countryside, conducted a few months before the crisis, not only reveal the aspects of economic, social and cultural deprivation, but also clearly display how government marginalization and neglect eroded the social structure in the region.Aleppo’s countryside has the highest illiteracy rate in all of Syria, estimated at 29.8 percent according to official figures, which reflects the size of widescale marginalization the region has been subjected to for many decades.

Official statistics concerning the situation in Aleppo’s countryside, conducted a few months before the crisis, not only reveal the aspects of economic, social and cultural deprivation, but also clearly display how government marginalization and neglect eroded the social structure in the region. This later pushed a section of the population toward violence and arms, leading them to eventually greet foreign fighters and ally with them to form armed divisions harboring various goals and ambitions.

The aspects of destitution in Aleppo’s countryside are not so different from those prevailing in other parts of Syria. It is the same poverty, unemployment and poor health, education and economic rates pervading all over the county. However, going into the details would reveal the size of the latent danger and the particularity of every region.

For example, it seems rather strange that the unemployment rate in Aleppo’s countryside is at 7.4 percent even though the area is considered among the poorest and most underdeveloped regions in Syria.

But when we dig deeper, and take into consideration other particular figures, such as the informal sector that dominates 43 percent of the labor market and that the average revenue generated from a ‘main job’ does not exceed 9,877 Syrian lira ($65), we come to understand that the unemployment rate is in fact a fragile factor lacking any of the positive impact it should normally have, specifically on social and economic levels.

“Regional development gaps appear in Syria between the center and the periphery,” Barout explained, adding that “large cities garnered the fruits of developments while cities counting hundreds of thousands and smaller towns were left with the thorns.”

A survey of household revenues and expenses, conducted a few months before the crisis, gave an accurate account of the nature of fears prevailing among Aleppo’s countryside residents

Hence, it is normal to see that earning enough money was worrisome for 53.7 percent of residents, followed by health at 20.1 percent, and being able to find a job at 14.7 percent.

The suffering of people living in Aleppo’s countryside, which extends from the administrative borders of al-Raqqa district to the outskirts of the city of Idlib, becomes more evident as we take a closer look into their daily lives and the services available in their villages.

Many official surveys conducted in the area indicate that local communities almost completely lack public and private hospitals and healthcare centers, while a large number of these communities do not have access to doctors, pharmacies, phone lines, bakeries, water networks and sewage systems.

Therefore, it is almost absurd or rather bizarre to even mention libraries, cultural centers and sports clubs, especially since 32.5 percent of households complained of leaks in the roofs of their houses and 23.2 percent said their houses already had mold problems in the walls and on the floor.

“Regional development gaps appear in Syria between the center and the periphery,” – Mohammed Jamal Barout, researcher

Mohammed Anbar, former vice president of the e-government executive team, shares a different point of view about the reasons behind the unfolding events in Aleppo. Although he acknowledges the impact of the social conditions, he does not consider them the most important contributing factors in the crisis that, according to him, has other legal and institutional dimensions.

Even before the events in Syria, Aleppo was considered “outside the state’s control,” as it lacked law enforcement and its institutions were weak.

Everyone still remembers the child-kidnapping rings and the security campaigns launched to arrest fugitives who were often released the following day, due to corrupted mafia practices.

It was therefore very unlikely that Aleppo’s countryside would remain calm and neutral toward the bloody events raging all over the country. In addition to the socio-economic factors, the following reasons also played a role in implicating Aleppo’s countryside in the events in Syria:

– The mounting influence of the quick developments that took place in Idlib’s countryside since the two regions held wide social and economic ties. Therefore, it was not strange to find that Idlib’s countryside militants constituted an important portion of the armed groups that have emerged in Aleppo’s countryside and in some neighborhoods within the city.

– The geographic location, near the border with Turkey, which was the first portal used by the outside world to interfere directly in the Syrian crisis, whether by sending in militants and weapons, or by encouraging locals to carry arms against the regime.

– The city of Aleppo, with its large population and economic structure remained calm for the first year and a half of the crisis. A matter that was exploited by the media to further establish “resentment” and incite “revenge” on the regime for its neglect of the countryside, as the city prospered.

This was manifested with the summary executions of many pro-regime figures when militants took control of some neighborhoods in the city, in addition to sabotaging and looting plants and factories located inside the city and within its periphery, as they were considered an aspect of “development discrimination” between the city and the countryside, even though the attacks were under the pretense of seeking to cripple the regime’s economic capacities.

Regardless of the reasons that sparked the current crisis in Aleppo and its countryside, the past two years of battles have only brought more catastrophes to the region. In fact, the fighting exacerbated the suffering of families who were already enduring social and economic difficulties, and led to the destruction of economic and social structures.

In addition, since the youth under the age of 15 constitute 45.9 percent of Aleppo’s countryside demographics, the crisis “militarized” an entire generation of young boys who suffered from poverty, illiteracy and poor graduation rate.

It may be enough to say that 23 percent of five-year-old children and above in Aleppo’s countryside have never obtained any education, while 86.2 percent of people who were enrolled in school before the crisis were in elementary classes but only 7.9 percent attended high school.