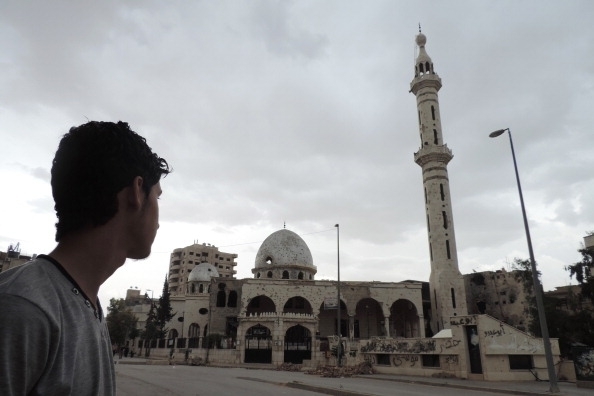 With thousands of Syrians displaced inside their own country, many are living in catastrophic humanitarian conditions in buildings, schools, mosques, parks and the cramped homes of relatives, crowded into single rooms. Others are trapped in neighborhoods isolated by military blockades, beyond the reach of aid groups.

To make matters worse, the Syrian regime through the Ministry of Endowments, has announced that it is in the process of conducting a maintenance plan that includes the closure of a number of mosques in Damascus. The plan includes the Masjid Abdul Rahman mosque in Baghdad Street and the Hamzah wa al-Abbas mosque in the neighborhood of Tijara, after displacing people who fled their areas in fear of regime’s aerial bombardment.

According to activists in the eastern part of al-Tijara area in Damascus, the displaced have been transferred by Assad’s forces to the area of Adra in Damascus Countryside.

Previously the regime emptied the mosques of Ghazwat Badr and Al-Ashmar in the Al-Zahera area, displacing people who were staying there after their homes had been destroyed or bombarded, mostly in Damascus’s Ghouta region.

On the other hand, activists have warned that the regime will use these civilians as “human shields” in its military offensives or in the prisoners “swap operations” with opposition’s detainees.

Abu Omar, a field activist with the Damascus Coordination Committee, has warned displaced families from complying with the regime orders in transferring them to Adra or anywhere else.

“We know that the families have nowhere else to go, and that because they are in desperate need, they sought mosques as shelters, but that is better than being deported into the unknown by the unmerciful regime," he said.