Moallem says terrorism can only be combated through perseverance, comprehensiveness, and the efforts of all countries 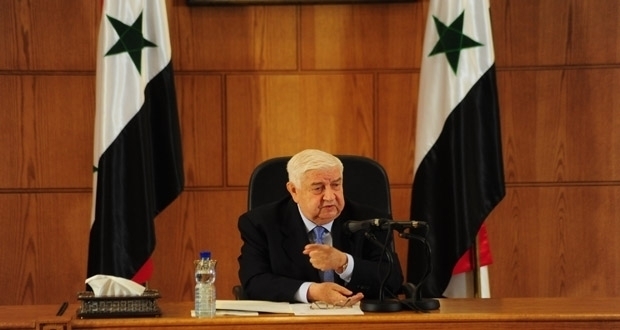 Syria is prepared to cooperate and coordinate on the regional and international levels to combat terrorism as per Security Council resolution no. 2170 within the framework of respecting Syria’s sovereignty and independence, said Caretaker Deputy Prime Minister, Foreign and Expatriates Minister Walid al-Moallem on Monday.

In a press conference on Monday, Moallem said that Syria welcomes resolution no. 2170 and is committed to it, despite the fact that this decision came late, noting that the consensus at the Security Council on combating terrorism is in line with Syria’s calls for drying up the sources of terrorism and facing the risks of its spread to neighboring countries.

He said that terrorism can only be combated through perseverance, comprehensiveness, and the efforts of all countries, noting that the Security Council resolution is binding for all states.

The Minister called for an end to the instigation and funding of terrorism, as well as calling for refraining from facilitating the movement of terrorists.

Moallem said all neighboring countries must pay attention to the dangers threatening the region out of concern for their own national interests, and they must cooperate to combat terrorism. he said it would be in the best interests of Turkey and its people to reconsider its foreign policies because "terrorism knows no borders".

He said that combating terrorists is carried out through serious political work to dry up its sources, cooperation with the Syrian government, and joint international efforts, rather than through a transgression against countries’ sovereignty, asserting that any breach of Syrian sovereignty by any side constitutes an act of aggression.

However, Moallem questioned why there hasn’t been any western condemnation of the massacres committed by the Islamic State terrorist organization against the Syrian army and citizens.