The works depict the current events and destruction in Syria 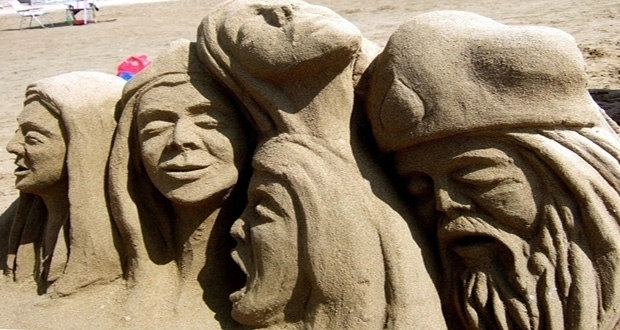 Visitors to the seashore of the coastal city of Banias in Tartous province these days are being treated to the sight of a remarkable set of sand sculptures created by artist Ali Moualla.

Moualla said he seeks to fill the loneliness of the seaside landscape with his own whimsical and captivating statues which epitomise his artistic career.

The current events in the country are reflected in his works. The image of the Syrian soldier occupies a major part of his works, along with the faces of veterans sculpted in a lifelike manner with care and dedication.

Syrian castles also take an important position in his works. In one of his best sculptures, all the Syrian castles are brought together, including the Aleppo, al-Marqab, Salaheddine, and Damascus citadels.

A wave caused one the sculpture’s towers collapse, but the artist chose not to restore it, opting to leave it as it is as a symbol of the destruction caused by terrorists.

Moualla wrote on one of his sculpture walls: “Syria will return”.

Another of his works represents the Syrian blind philosopher, poet, and writer Abu al-Alaa Al-Maarri. It is one of the artist's most significant masterpieces, depicting the poet opening his eyes to witness what is happening in the country at the hands of terrorists.

Moualla is now preparing for an exhibition where his paintings will narrate the story of the Syrian women who have suffered during the crisis, emphasizing their strength and worthiness as the origin of life and resilience.

His paintings are full of the agony and wounds created by the crisis and the aggression waged against the country.

Moualla took part in Abu Dhabi International Sand Sculpture Festival in 2011 and won first prize, but he was stripped of it due to his Syrian nationality.

He also participated in the Sand Sculpture Festival in Banias on 2010, and worked on the film of “King of the Sands” by Syrian producer Najdat Anzour as he built an amazing replica of the palace of the Saudi king known as al-Mesmak.