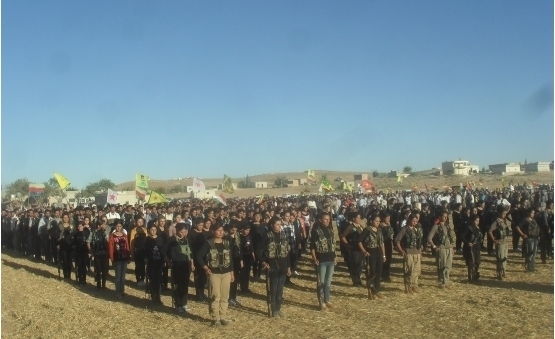 A Kurdish female fighter, Arin Mirkan, blew herself up in a suicidal attack carried out at an IS position in Mishtenur hill east of Kobani city, northeast of Aleppo governorate.

Kurdish media activist, Hozan, told All4Syria in an exclusive interview that Mirkan is one of the Kurdish female fighters and the leader of a unit of Women Protection Units (YPJ) which fight beside PYD's People Protection Units against IS attack targets Kobani, the third biggest Kurdish city in Syria.

IS has been trying to storm the city on the Turkish border for 20 days and now IS surrounds it from the east, west and south. The People Protection Units source said that 86 IS fighters have been killed in Kobani in the last 24 hours, and the units have destroyed an ammunition storehouse near the city.

IS has intensified its attacks on Mishtenur hill southeast of the city center by using heavy weapons and bringing more reinforcements.

Field sources confirmed that fierce battles are taking place between IS and the Units supported by some Free Army factions – in the outskirts of the city, and that the artilleries and tanks of IS have arrived at the hills surrounding Kobani.