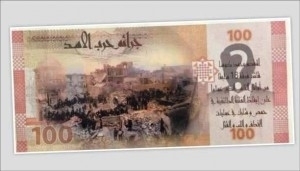 Residents of Damascus and other regime-held areas in Syria woke this week to find new currency notes for of 50, 100 and 200 Syrian Pounds circulated, carrying the names of Syrian officers responsible for throwing explosive barrels, torture or use of chemical weapons.

The notes were not real, but printed in a symbolic manner to commemorate the army officers' exploits.

The currency can be seen as a revivial of the civil movement and the role of the Local Coordination Committees in Syria, which have been weakened by the extreme violence used by the regime and the Islamists.

The Internet has provided little information about the names printed on these currencies, with searches yielding no results. This would indicate a great degree of coordination between the civil society groups and the Free Syrian Army on information.

The currency designs featured the phrase "The crimes of Assad's war" in place of the "Central Bank of Syria". On the other side they printed the phrase "Stand on the right side of history". They also featured images from different bombed and destroyed areas of Syria in the usual place of historical and archaeological sites printed on the original Syrian currency.

Signs indicating coordination between the Free Syrian Army and the civil society groups are also the adoption of anti-sectarian phrases. On the 100 Syrian Pound note the name of Colonel Mohammed Kousa is printed, with the details of charges against him: "The former commander of the 18th Brigade, one of the first people who worked on stirring up sectarian strife in Homs and participated in kidnappings and killings of civilians". The other side of the same note says: "Colonel Hassan Ghannam, Chief-of-Staff of the 59th Brigade", with the charge: "Throwing explosive barrels."

On the 200 Syrian Pound, the name "Colonel Aghyad Muhsen" is written, saying he works with Air Force Intelligence, Mezzeh prison and Mezzeh military airport, and charges include "torture, murder and rape". On the other side of the note, "Brigadier General Saleh Abu Mahmoud", is written, "Commander of Brigade 59, accused by Syrian dissidents of throwing explosive barrels".

As for the 50 Syrian Pound paper, activists printed the name "Colonel Khaled Maalouf," the commander of the 525 Squadron, who is also accused of "throwing explosive barrels". On the other side of the note is written "Khardal Dayoub", from Air Force Intelligence, Brigade 55 in East Ghouta, who's charge is written: "Torture and use of chemical weapons".