Government forces, the armed opposition, ISIS, and the Kurds all now include female militants 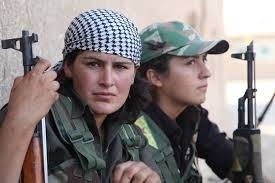 The number of female fighters joining the bloody conflict in Syria had risen significantly lately, in part due to the belief that the war will last for many years.

In a conference in London last week, the former U.N.-Arab League envoy Lakhdar Brahimi said that in Syria, "there are war plans rather than peace plans”. He pointed out that all parties claim they don’t believe in the military action, but "insist on using it, seeking what they call a 'decisive victory'".

Juhaina news agency, a pro-regime outlet, published a video showing a woman called 'Maria' talking about her reasons  for joining the army.

"I joined the Syrian Arab Army to show the world that it is not only men defending Syria," she said in the video.

"All of us here have lost a family member; we are here to take revenge on the Syrian opposition."

A girl calling herself 'Samara the commando' said she had joined the army to "help her brothers". Another explained that "there are five girls in my family, and we are all here and will all give up our lives for Syria and Bashar Assad".

'Rahaf the commando' said "it is a good thing  to learn how to fight wars side by side with our brothers".

Syrian sources said some 100,000 young men descending from the regime’s sectarian and political base have been killed, most of them from the coastal areas in the west of Syria.

The number of mandatory service recruits has decreased. There were over almost 70,000 every six months before the war started, and the total number of the armed forces used to be around 200,000, with about the same number in reserve service. Now the number has decreased to about a third. Thousands of soldiers have defected and escaped to Turkey and Jordan.

Syrian authorities have provided incentives and penalties to facilitate the return of defected soldiers, and to encourage young men to serve their military service rather than escaping to neighboring countries.

'Tharaa the commando'  said that she volunteered to fight with the army.

"My family consists of six girls and three young men and we have all volunteered. We would give up our lives for Syria and for Assad,” she said. Playing in the background as she speaks, girls can be heard chanting "Syrian, Syrian, Assad and the Republican Guard” and "Here is a message to terrorists: We will fight till the last breath”. The video included scenes of girls participating in the fight near Damascus, using heavy weapons and driving heavy machinery.

On the other side, Souad al-Kayari, who introduced herself as "a leader in the Syrian armed opposition" warned that "if all men died, the regime would have to face women".

Kayari, 36, said that she had been participating in the fighting on the northwestern fronts in Idleb countryside. She said she had been training a brigade of 45 women to face Assad's forces and participate with other opposition brigades in the battles.

Anadolu agency quoted her as saying that she is participating in the battle of Abu Alzohour airport in Idleb countryside and that she is stationed at the closest point to the airport.

"Some young men followed their women to Turkey," she said. "If they were truly men they would have stayed here”.

Meanwhile, a group of collage girls from different parts of the country announced the formation of a brigade called 'Our Mother Aishaa' in Aleppo to fight side by side with the FSA fighters in the north. Activists published a video showing these girls during training wearing military fatigues, holding Kalashnikov rifles and standing with a field commander who was also wearing military uniform.

"We are here seeking jihad for the sake of God, to fill the gap and raise the banner of religion now that all the nations have gathered against us and no one had supported us,” she says.

Women have been strongly represented in the medical and relief fields since the beginning of the revolution in March 2011.

A group of girls called "Aishaa the mother of believers" was formed to provide medical care and aid for the wounded.

"We will fight against Assad forces and shabeeha militias until the last breath," she said.

Women's engagement was not limited to the regime and the opposition. Kurdish women have also been engaged. The YPG, the armed wing of the PYD, led by Saleh Muslim is based on a leftwing ideology that resembles the ideology of the Kurdistan Worker's Party, led by Abdullah Öcalan.

Interestingly, a woman has been leading the fight against ISIS in Ayn al-Arab (or Kobani in Kurdish).

Rami Abdulrahman, the director of the Syrian Observatory for Human Rights, said that a woman called 'Maisa Abdo', is leading the YPG forces side by side with Mahmoud Barkhadan.

Like all other Kurdish fighters, Maisa Abdo, 40, has a nickname, 'Narin Efrin', in reference to an area to the north of Aleppo called Efrin.

One of the activists described her, saying people knew her as intellectual and clever. "She is an example of morality and kindness in spite of the cruelty of military life. She understands the psychology of the fighters and discuss their problems directly with them," the activist said.

ISIS has its own female fighters. A French woman filmed a video in the city of Raqqa, the stronghold of the organization in the northeast of Syria, showing French women living inside the 'Islamic State' declared by Abu Bakr Al-Baghdadi, talking to their parents assuring them they were safe.

Armed men and women were shown in the video walking in the streets,  while one woman carrying a Kalashnikov rifle on her shoulder was seen walking a child to the playground.

Some 150 French women and tens of European women have travelled to areas occupied by ISIS in the west of Iraq and the northeast of Syria.

ISIS also has an 'emira', or princess that looks after the female fighters and organizes their responsibiltities. One emira, responsible for recruiting girls and women from Anbar in Iraq, was arrested at the beginning of this year.

Currently a Tunisian woman named Umm Muhajer is leading the al-Khansaa Brigade in Raqqa. This brigade includes 60 woman known for covering their faces with a black veil and carrying heavy weapons. Activists reported that all girls should be single and 18-25 years old if they want to join this brigade.