As all the established graves are now sold, any new grave will be in an empty space and the diggers will prepare for it at their own expense 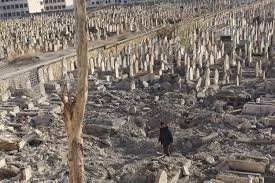 Sources in Damascus Governorate have confirmed that the preparation of previously established graves in Mazzeh 86 and Kafrsouseh cemeteries has been completed, indicating that the graves are currently being dug by individuals, not the governorate.

There are now 30 cemeteries in Damascus, the governorate sources said.

The sources said the Executive Office of Damascus Governorate has specified 12,500 SP as the cost for preparing a grave in Kafrsouseh and Mazzeh 86 cemeteries. In addition, each citizen wanting to purchase a new grave should pay 5,000 SP to the Muslims Cemeteries Fund.

"The Burials Office specified a lower price for the graves established in Kafrsouseh and Mazzeh 86 cemeteries because their graves were prepared and equipped, but as all the established and ready graves are now sold, any new grave will be in an empty space and the diggers will prepare it at their own expense. Therefore the price was raised to 12,500 SP, " the source explained.

Translated and edited by The Syrina Observer