Water supply is being used as a political tool 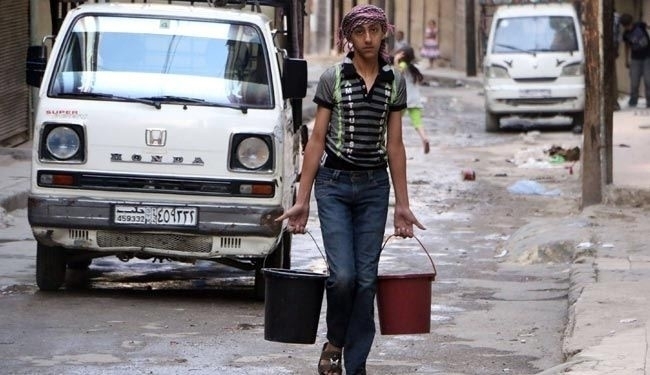 Damascus has been living without water since regime forces launched a military campaign against the Barada Valley and the Ain al-Fiji site – the main spring source that provides Damascus with water.

The move has prompted a wave of criticism by both pro-regime residents and their opponents against the party responsible for depriving millions of people in Damascus from water.

The regime media joined the wave of criticism along with opposition voices by holding the people of the valley and the military factions responsible, which angered these people and forced them to defend themselves and name the party responsible.

"The army of Bashar Assad bombed the al-Fiji spring and the pumps that provide Damascus with water during its last campaign when it was bombing our houses. It is the only party responsible for your suffering," said Abu Mouhammed, a 60-year-old man and one of the notables of the Barada Valley, in response to the accusations.

On the other hand, the Assad regime has insisted on accusing the opposition factions of depriving Damascus of water. In addition, it has stopped all other water sources that supply Damascus and the surrounding areas to revive the reaction against the opposition and to increase the suffering of the citizens and thus guaranteed a high level of the public and media pressure against the people of Barada Valley and the military factions there.

A few months ago, a truce was signed by the regime forces and the opposition factions. The regime promised to stop shelling and targeting Barada Valley, and to stop all military campaigns there, while the opposition promised to keep the water flowing toward Damascus. The people of the valley accuse the regime forces of breaching the truce and shelling many areas like Baseema and Ain al-Fiji. This resulted in the death of many martyrs and many injuries, while many places were destroyed.

Food and medical supplies were prevented from entering the area and many men, women and children were arrested during the last military campaign. This increased congestion and the people started demanding an end to the use of water flow in self-defense, while others insisted that the regime forces were the ones responsible for this action.

Kamal Jamal Addin, the director of the media center of Barada Valley, described the scene and talked about the regime's responsibility for the issue. He said that this happened after the regime targeted the water pumps at the spring, causing large damages. The regime is preventing engineers and technicians from entering the area to fix the damage and his snipers are targeting anything that moves there, he said.

Regarding the latest events he said that "according to the truce signed by the two parties, the water flow has returned partially, after the regime accepted the truce conditions. The regime released two women and a child, and stopped the shelling and firing, but kept its troops in their location, which contradicts the first condition. The rest of the detained women should be released within the next 12 hours".

The source pointed out that the regime forces are still located at Alzenieh in Baseema village while the rebel brigades remained in their locations to stop any progress or infiltration by the regime forces. The power returned for six hours last night in some villages after it was cut off for almost two years. But the roads were not opened yet as they were supposed to according to the conditions to let the food, the medical supplies and fuel enter the area as well as allowing the engineers and technicians to enter and fix the pumps of Ain al-Fiji.

In addition to this, the source said that the regime forces still exist on the road to Deir Qanoun Desert, and they are preventing the movement of families, allowing only the employees and students to get in and out the area.

The water issue is one of the most important issues affecting Damascus, already suffering a lack of other resources.

Asmaa, a civil engineer from Damascus, confirmed that the water traction channels and the water pumps in Ain al-Fiji are badly damaged. She pointed out that the water that reached Damascus was well water, as it was turbid and impure which was clear evidence that this groundwater was pulled from the bottom of the aquifer. She also pointed out that there are many sources of water that supply Damascus, not only one. The first is Ain al-Fiji, which stems from Barada River and it is one cubic meter. It extends from the lowest surface of the Barada River which dropped due to the unjust redirection toward Damascus, then it heads toward the hospice, then Barada market and finally merges with al-Fiji, which flows all year. The other source that supplies the city and the suburbs is the water from Deir al-Ashaer and Rakhleh wells that provide about 30% of the city’s needs, in addition to a large set of local reserve wells that exist all around the city. There are 50,000 cubic meter tanks in the parks and inside the governmental complexes connected to the main network that provide Damascus from Alwali tanks on Qassioun mountain and Alshami tanks.

Asmaa asserted the intentions of the regime to increase the suffering of the people there, in spite the fact that Damascus is almost reaching the same circumstances as the 1973 October war. The municipality of Damascus has sunk and prepared reserve wells to face the possibility of the destruction of the spring and the channel connecting it to Damascus by the Israelis. She pointed out that the spring rout goes through Ashrafiya Wadi and Baseema, to Dummar and then Qassioun and finally reaches the Alwali tanks. She also queried where all this water had gone and why Damascus and its suburbs were forced to suffer, questioning whether the water was cut off to exacerbate the crisis and the suffering of the citizens.

Cutting off water as a method used by the opposition brigades to defend themselves was criticised by many. It increased resentment of activists in other areas like Ghouta, which had been living this kind of suffering for two years.

Muneir Alfa, from besieged Daraya said that the regime has used the same method and prevented all the basic services in the besieged areas in Damascus, Aleppo and Homs. The opponents and the pro-regime haven't shown the same concern about this systematic method when used by the regime against the besieged areas, he said.