Regime media seized the opportunity to prove the mercy of the regime, presenting it as their savior 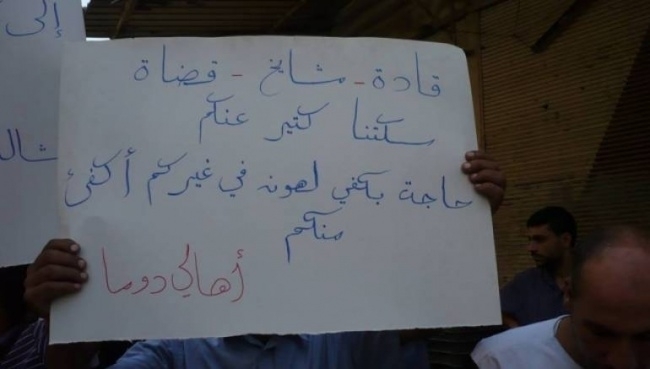 As the severe seige against the people of Eastern Ghouta increases, especially after the closure of the al-Wafidin barrier, a monopoly on food by war traders has also driven a crazy increase in prices in the absence of any oversight.

"Despite the threat by the United Judicial Council against product monopolisers and the official setting of reasonable prices, no one cares and prices are kept high, increasing even hourly," activist Ammar al-Dumani told Zaman al-Wasl.

He attributed the traders' lack of consideration for the Council's decisions to a lack of implementation mechanisms for its decisions, as well as the mutual benefits between the armed opposition's leaders and traders, who turn a blind eye to the practices.

Abu Mohammed, from Eastern Ghouta, complained of the living conditions and mad prices, expressing pain at his inability to feed his family.

"If the situation remains like this, I will go to Damascus to have a better life," he said.

Many others in Eastern Ghouta expressed the same sentiment, risking their lives as they move, ignoring the threat of snipers to congregate at checkpoints to beg them to let them out to Damascus.

Regime media seized the opportunity to prove the mercy of the regime, presenting it as their savior. Regime television broadcast soldiers giving people food and showed convoys moving people from Ghouta to Qudsaya in Damascus. Many activists described this method of helping people as a "humiliation for the revolution".

The armed opposition of Eastern Ghouta is helpless toward the situation; all they do is hold the international community responsible for the seige, accusing them of attempting to defeat the revolution, according to Islam Alloush, a spokesman for the Islamic Front.

Al-Dumani considered that providing food and other products should be under the responsibility of the armed opposition in Ghouta, as they could have found safe humanitarian corridors under their control, instead of leaving the area under the regime's control and changing plans.

Al-Dumani with other activists threatened demonstrations and sit-ins against the armed opposition, if they could not sort out the siege and monopoly.